#ICFF16 Interview with Filmmaker Alberto Diamante of "The Bookstore"

By teaching a teenage boy how to win over a girl, a crusty bookstore owner learns to resolve his own romantic troubles. This is the story of The Bookstore, the charming, thought-provoking comedy by Alberto Diamante, which is in the lineup of Canada's Italian Contemporary Film Festival.

Alberto Diamante is a jack-of-all-trades. He wrote the screenplay, directed the film and participated as a lead actor. We met last year in Toronto at the Italian Contemporary Film Festival. He photographed my interview with Edoardo Leo, and we had a very nice conversation while waiting for Leo to arrive for the interview. However, I had no idea the range of his talent. Now living in Toronto, Diamante is originally from Italy. He called on his Italian culture when writing the screenplay for The Bookstore. I spoke with Diamante about those roots, his many talents and the idea for this film.


So where did this idea come from? I like this storyline that explores someone in their 30's dealing with their own mess to give advice to a teenager!
The idea comes from my love of literature and theatre. The emphasis, of course, is on Italian culture, romanticism and Italian comedic traditions. The main character (George) thinks of himself as a very worldly, well-rounded guy, but in reality his world is very small. I decided to use a single location to show just how isolated he really is. As I was constrained by a very limited budget, a bookstore seemed like a suitable solution because characters can discuss all manner of dilemmas in a witty, humorous way. It’s also very challenging: to find a gripping story in a static setting. The characters, dialogue and situations have to be scintillating or people will get bored quickly. 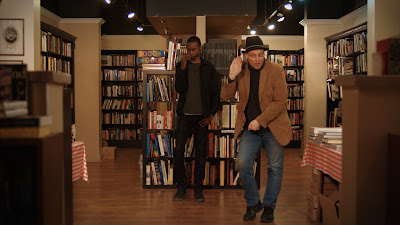 Since you wrote it, is there a character with whom you connect or relate to the most?
I play George, who is a highly fictionalized version of myself. He is the bookstore manager. I like him because, while he’s well-read and opinionated, he is often wrong in absurd, almost operatic ways. One of my favorite scenes has to do with his description to a detective of the men who robbed his store. George describes them as having “Dickensian eyes, Mephistophelian eyes, a vise-like grip and reptilian reflexes.” Of course, this description is absurd, as the detective quickly points out, but I love it because I thought that it might be the way a highly literary person might describe a robber. If James Joyce were alive today, that would probably be the way he would describe someone who just stole his wallet.

Which part of the filmmaking process comes most naturally to you- writing, acting or directing?
I love every aspect of filmmaking, although in different ways. Writing is more intellectually challenging, because you’re dealing with an empty page and have to fill it with fascinating characters, stories, plot twists, etc. It’s also easier to edit: you just delete a paragraph and start over. With directing, the stakes are much higher: every mistake costs time and money. It’s a high-wire act with no net. However, it’s also more rewarding because you get to witness a scene come to life as you had envisioned it.


In terms of acting, I’ve been acting since I was in kindergarten. It comes totally natural to me and I enjoy it. However, the truth is, I did not want to act in this film. I already had too much on my plate. The problem is, George is such a highly complex character that I couldn’t find someone to encompass all his multitudes. The actors who auditioned all sounded like a stereotypical Italian character from The Sopranos trying to quote literature. It was like, ‘The Godfather goes to the library.’ No nuance, no wit, no humor. So I was forced to play George myself. 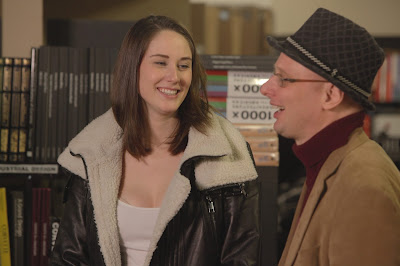 What is your personal story? Where exactly are you from and why did you move to Toronto?

I was born in Italy, and moved with my family to Kuwait for three years. We moved back to Italy for six years, then moved to Toronto. I decided to stay here because it’s a vibrant, multicultural city full of art, life, cinema, etc. I’ve been living here for about 30 years now.


Tell me about Toronto- or Canada in general- in terms of Italian culture. The country seems to have a huge population of Italians.
Well, there are three kinds of Italians here, essentially. There are the old-school Italians, who immigrated here forty-fifty years ago. They still speak the language and are very proud of their Italian heritage. They watch Italian television and listen to Italian radio programs. Then there are their children, who speak little or no Italian and have only a frail connection to Italy. They are essentially Canadians who talk with their hands and eat pasta. Then there’s the third kind of Italian: those who immigrated in the last 10 to 15 years. These are often well educated, speak Italian fluently, and are dissatisfied with the way Italy is being run today. They are part of the “brain drain.” They are often unappreciated in their homeland and emigrated in order to find a place that would appreciate their talent. In fact, if it weren’t for strict immigration laws, there would be an avalanche of new Italians in Canada today.


What is your dream for this film?
I was reading the box office receipts for Avatar yesterday. It made 2.8 billion dollars. I calculated that, if everyone reading this article sees the film and tells exactly 6,787 of their very best friends about The Bookstore, and their friends tell their friends, and so on, in exactly 14.7 years we can beat that record. Seriously, though, I am hoping to secure distribution for this film and the chance to make more films. Bigger, better, more ambitious films.

The Bookstore will be shown on June 14 during the Italian Contemporary Film Festival at the TIFF Bell Lightbox. Click here for more information and to watch promotional clips.
at May 19, 2016