On June 15, Director Renzo Martinelli will present the film "Ustica" in Toronto at the Italian Contemporary Film Festival. Based on a true story, Martinelli explores the unsolved mystery of a downed passenger plane in the Tyrrhenian sea between the islands of Ponza and Ustica, located in the stretch of sea between Rome and  Palermo.

On June 27, 1980 at 8.59 pm, a DC9 belonging to the private Italian airline ITAVIA disappeared from radar without launching any emergency signal. The airplane was flying at cruise speed at an altitude of 7,600 meters, along the airway “AMBRA 13” when it suddenly crashed around the “CONDOR” point between the islands of Ponza and Ustica, sinking in the  “Tyrrhenian trench”, which is 3,500 meters deep. All 81 people onboard died, including 14 children. 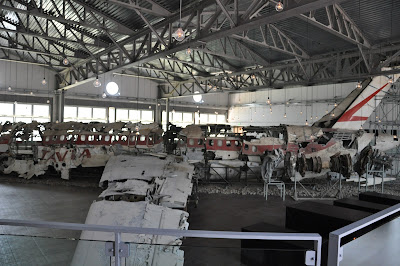 The wreckage and bodies that were recovered indicate something happened to the aircraft while in the air, whether that be an explosion or collision. Evidence shows the plane broke into two main sections. Many hypothesis have been raised to explain the possible cause of the crash such as structural failure of the airplane, a bomb in the rear bathroom, a missile or a mid-air collision with an American fighter jet, which is explored in depth in the film. As we see in the film, the few workers who actually saw what happened with their own eyes mysteriously died in the months following the crash. I thought this was fiction but after doing some research, I was surprised to see that those people really did pass away.

﻿
I recommend seeing "Ustica" because the plane crash is a part of recent history and an event that many North Americans don't know much about. However, I have a few criticisms. The film stars Marco Leonardi and my biggest issue is that his voice was dubbed. The film was made in English. Leonardi has appeared in a number of American films and lived in the United States for many years. So it's a mystery to me why the choice was made to dub his lines, especially since his wife in the film has a strong Italian accent. If I was attending the Q&A, this would be my first question. My other criticism is with the contrived script, which made it hard for the actors to recite their lines naturally. I think this film would have been much better if it was made in Italian and presented with English subtitles. With that said, I think it's an important history lesson on a somewhat recent current event and should not be missed. If you are unable to attend the screening, check out the website for the museum in Bologna- Museo per la memoria di Ustica, which houses the wreckage and personal belongings that were recovered in the aftermath of the tragedy.

Watch the trailer.. (which is actually dubbed in Italian)