My Complete Interview with Edoardo Leo

Starting his career as an actor, Edoardo Leo grew to be uninspired by the roles he was being offered, so he took matters into his own hands. Following in the footsteps of his film idol, Carlo Verdone, he decided to begin writing and directing as well as acting. Those efforts culminated recently in Noi e la Giulia, Leo’s 2015 film about a group of 40-somethings looking to reboot their lives. The film won a host of prizes all over the world and is truly a masterpiece.

Although the success of Noi e la Giulia has taken Leo’s career to another level, he wasn’t doing so bad beforehand. Upon graduating college in 1999 where he majored in literature, Leo formed an acting troupe with his good friend Marco Bonini, with whom he still collaborates. He perfected his craft while building a solid career as a theater, TV and film actor, but found himself playing the same role over and over again. Tired of being pigeonholed as the handsome guy who saves the day, he seized the cinematic reigns, reigniting his passion for acting while reflecting his own vision as a filmmaker. 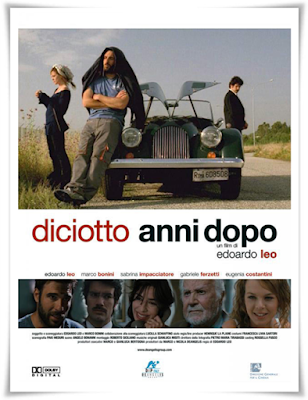 His first project as writer-actor-director came in 2010 with the drama Diciotto anni dopo (Eighteen Years Later). Mirko, a businessman played by Leo and Genziano, a mechanic played by Marco Bonini are two brothers who have not spoken for eighteen years since a car accident that caused the death of their mother. When their father passes away, the two brothers meet again at the funeral. To honor their father’s last wish, they are forced against their will to travel together to Scilla, Calabria to place his ashes beside the grave of their mother. Going to Calabria forces them to take the same stretch of road where their mother was killed. The film was a huge success and won awards at festivals all over the world, including the United States.


Leo earned much critical acclaim for his performance in Sydney Sibilia’s wildly successful comedy, Smetto quando voglio (I Can Quit When I Want). The story speaks to a group of professors and scientists who have lost their jobs and are forced to find work washing dishes and pumping gas to make ends meet. Completely fed up, Pietro (Edoardo Leo) comes up with a plan to develop a legal drug that he could sell to club kids looking for a quick high, much to the dismay of his wife, a social worker, played by Valeria Solarino. He enlists the help of his fellow down-on-their-luck geniuses, which include an economist, chemist and anthropologist. The group goes on to make money beyond their wildest dreams. But with the money comes a whole new host of problems. What ensues is a hilarious adventure watching these self-proclaimed ‘nerds’ take on ‘tough-guy’ roles and try to assimilate into the underground world of drugs and corruption. Leo presented Pietro as an endearingly flawed character with a serious streak of bad luck. The film was shown at numerous film festivals and series across America and is still making its rounds on festival circuits throughout the world. Filming for a Smetto Quando Voglio trilogy began in March. 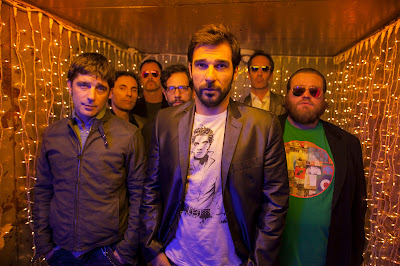 American audiences also had the chance to see Leo in Woody Allen’s 2012 film, To Rome with Love.  Leo had a small part as the reporter in the barbershop scene alongside Roberto Benigni’s character.

I had the pleasure of meeting Edoardo Leo in Toronto last summer at the annual Italian Contemporary Film Festival. He was there promoting Noi e la Giulia. I found him to be humble and sincere, truly loving to talk about his work and his idols, Carlo Verdone and Bruce Srpingsteen. I published one part of the interview last year in an article for my series, "Basilicata: Terra di Cinema". Now, in recognition of my feature article about Leo in this month's edition of Chicago's Fra Noi Magazine, I am publishing the rest of our interview. 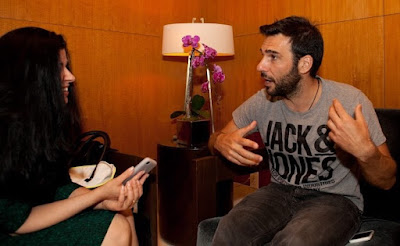 Tell me about your road to becoming such a great comic actor. You have impeccable timing and you’re able to be self-deprecating without losing your dignity or respect as an actor. In other articles that I have written, I have compared you to Marcello Mastroianni because you possess many of his qualities. You’re handsome, you’re funny, your expressions often say more than you could say with words. So how did you develop this talent?
I don’t know. (Laughs) I’ve worked a lot in the last 20 years on myself and on my work- my acting, my writing- my way of directing other actors. Maybe the secret in this moment, in the last 5 years is that I’m really loving what I’m doing. I work a lot on the scripts, with my crew and with my cast. So I feel to be in the real heart of life in this moment. In the beginning of my career, I usually acted in roles as a hero, a policeman, a biker and I found that kind of role very boring. So over the years, I realized that I wanted to work on my face and my body for being a good comedian. I love destroying myself. As you can see in Noi e la Giulia, with the strange hair and strange clothes. It was very funny. I really found the hero role a little bit boring. I wanted something different like an anti-hero role. So in the last 5 years, I've been able to write my own roles and I decided to write different and to write for myself. In my first movie as director, I created a role about a stuttering man. The title was 18 Years Later. It won a lot of awards all over the world. And people said to me, you have the opportunity to write something really big and important, but I really like to just destroy my image.

Carlo Verdone has done that, too. Would you say that you’ve been influenced by him?

Yes, a lot. Carlo Verdone is one of my heroes. He is a great actor, director and writer. Maybe if I decided to work as a writer, director and actor, it’s because I really love him. He is great. He sent me a very nice message after I talked about him in an Italian interview. He’s a comedian but in his movies, you can really feel his feelings. Inside the movie, there is a sadness. Not only the comic way of movies but a sadness. He can make you laugh with sadness and only a great comedian can do this. 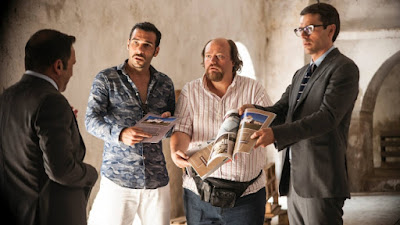 Well in Italy, we are in the middle of a great crisis, both economic and cultural. For my generation, I really feel that a lot of my friends are struggling with decision like whether they want a family, if they choose the right job, if they can lose the job. So that’s why this is my third film as director and I decided to face this problem in the third film because we may have a wrong cultural model. For twenty years in Italy, under Berlusconi, we followed the wrong way. What I would like is that every man and woman asks themselves what they really love, what they really want to do. In Noi e la Giulia, I take pride in being a failure. It’s an ode to being a failure. You can fail and you can say to yourself, I am 41 or 42 but maybe I can restart but to restart, you have to say to yourself, I am a loser. We always follow the cultural reference of winners. Everybody wants to be winners on social media like Facebook and Twitter. I never read a status like, Oh I’m a loser. Instead it’s like, I am cool, I am happy- but never I am a loser. We are very fearful about losers. But we need to say it, to admit it and make changes to start a new life. And that is what my characters do in Noi e la Giulia.

There has been a huge surge in film production in Basilicata during the last year with movies like Ben Hur,  007” and your film, Noi e La Giulia. Tell me about your experience there.

It was a great experience. In Noi e La Giulia, I never mention Basilicata. I wanted to shoot a sort of symbol of the south of Italy, never mentioning Campania or Cammora or the Sicilian mafia. I just wanted to be in the heart of the south. Now in Basilicata, they have a great film commission so I was able to shoot with fantastic people in a fantastic place, so I am very happy. 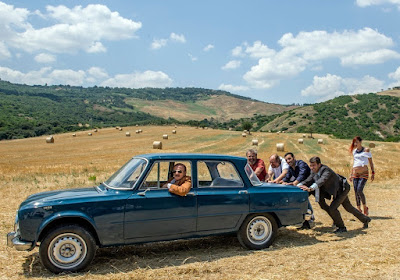 How did you find the farmhouse?

We saw the farmhouse when we started to scout locations. Sometimes you can spend more than 20 days to find the perfect location. In this movie, we just used the one location and it was the first one I saw. It was a real miracle, but after seeing that farmhouse, we were all convinced that it was perfect. We said, let’s continue to look for something else but we were all convinced that that place was perfect for the movie. Basilicata is a great place and I would like to come back to shoot another film.

What makes Basilicata such a great place to shoot a film? 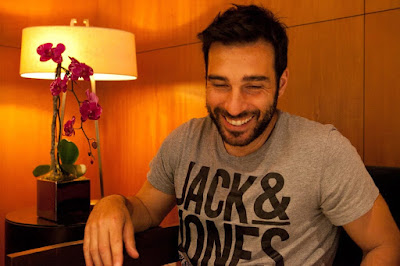 Did you enjoy the culture and the food, in particular? We can’t talk about Basilicata without mentioning the amazing food and of course, Matera’s famous bread.
(Laughs) Yes, the food in Basilicata is great, really great. Every night, we went to Matera to eat the traditional food of the region.. and the bread, too. It all was great.

What do you think of all the support for your film and the pride of the people of Basilicata?

They are very active and they’re very proud of their region. When you talk about Italy, you always talk about the south of Italy, and you mention Sicily, Calabria or Puglia. But in the last three or four years, they really have made Basilicata shine, and they’re right. I think in the next 10 years, more tourists will come to Italy to visit Basilicata. That is what I dream for them.

So where’d you learn English?
Through Bruce Springsteen lyrics. I always loved the Boss and when I was a child, I studied and learned all his lyrics by heart and read the translation.


Edoardo Leo is following in the footsteps of his great predecessors and becoming an example and a voice for his own generation. For more information, visit him online at http://www.edoardoleo.com/.
at June 17, 2016