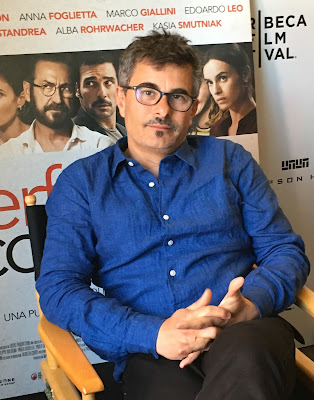 Pre-production for Paolo Genovese's next film is officially underway, and the big news is that it will be shot in English in New York. Addressing an audience at the Giffoni Film Festival, Genovese said the new project, titled The First Day of My Life (Il primo giorno della mia vita), will be very different from his blockbuster, Perfetti sconosciuti (Perfect Strangers). He explained, "It will be the contrast, very positive." He went on to say, "It's probably a reaction to this moment when the whole world seems to be on fire. I want to make a film about the beauty of life."

Paolo Genovese is known for his character-driven stories, mostly labeled comedies. Although, my feeling is that they are more along the lines of drama with strong comedy relief. In America, as he pointed out in an interview with the Italian newspaper, Il Messaggero, we call them dramedies. From his coming-of-age film, Immaturi to his southern Italian romantic comedy, Sei mai stata sulla luna to his latest film, Perfetti sconosciuti, Genovese looks past the superficiality of people and brings to the surface their weaknesses and flaws. His films have evolved over the years and have become symphonic productions in the way that they are written, directed, shot, lit and edited, accompanied with his beautiful emotionally-driven music scores.

I sat down with Paolo Genovese in April when he presented Perfetti sconosciuti at the Tribeca Film Festival in New York City. We talked about the evolution of his career and his filmmaking process from script to screen. 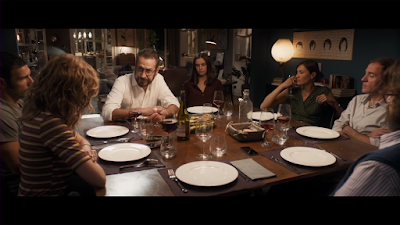 I read that Perfetti sconosciuti began as just a scene in a movie and then evolved into this feature film. What made you decide to transform this one scene into a film?

At the very beginning, I wanted to make a movie about the secret lives of people but this was just a theme. Then as a screenwriter, the problem was to find an interesting point-of-view. So I tried to come up with different situations to speak about this secret life but nothing was sufficiently interesting. One of the scenes from the old scripts was this woman who put the phone on the table and asked the others to do the same thing but no one wanted to do it. So the woman said, 'Good, we understand each other'. So when we were writing, I said it could be very interesting if the other person could put the phone on the table and they played this kind of game. And then we thought it could be very interesting if the whole movie was about this situation. So we changed the point-of-view of the story and tried to write a story that would take place during one dinner around the table. We decided on this new direction because for me the most important thing is to have an original idea and not just a general theme, which could apply to a hundred movies. That was a very original idea. So we tried to write this kind of movie.
And speaking to the one point-of-view, I noticed there were several collaborators on the screenplay. How does the development of your screenplays work? Your characters are very well-developed, so I'm curious about your writing process.
I write, I physically write. I need to write. And I usually work two times a week, usually on Tuesday and Friday, and I speak about the structure, the character, the situation. I speak a lot and put it all together.. the background, where the character is from.. and then I take a few days to put all these ideas in order. Then I send it to each one of the other screenwriters. They read it and then we meet again on the following Tuesday and Friday.

It's obvious that a lot of thought goes into the backgrounds of the characters because I really sensed their pasts. I am also curious about the production details. Everything seemed so well-planned and orchestrated in regard to the lighting. There was a certain ambience and it really set the tone for this intimate dinner between friends. I appreciated this.. and they way the props were placed.. the beautifully decorated homes. There were so many books on the shelves, so many utensils in the kitchen. Did you have a part in that? Does that task go to the set designer or do you say, I want the house to look like this?
In Italy, the director usually follows everything. Even if there is this bottle on the table, I would decide what kind of bottle. But I have a set very good designer and that house was an old house of a friend of ours that we completely restructured. We hired a company to knock all the walls down.. everything, even the bathroom and kitchen. We restructured everything, like in a theater but in a real apartment.

I felt like the apartment was also kind of a protagonist, especially in the way it was lit.
I designed it exactly with the visible connection of the space- for example, where I would like to have the bathroom and kitchen, the terrace.. I feel very lucky that we were able to do that. I saw about 50 apartments but nothing was perfect. So in the end, we found this one and we decided to build. 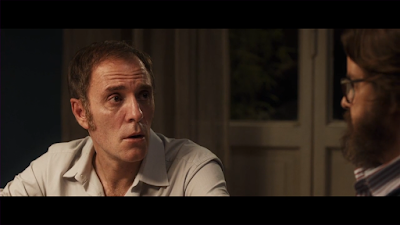 What I also noticed was Consuelo Catucci’s editing. The quick, clean cuts made it very easy to follow while reading the subtitles. Can you tell me about this process of editing?
Yes, the editing is not only important when the main character is speaking but it’s also important when the other characters are listening. You have a lot of possibilities when there are seven people sitting around a table. It is really complicated to find the exact gaze and eye contact, the different smile. When they eat, sometimes you notice a character pretending to eat. It’s not believable. So we have to choose the moment when they really eat. I asked them, please eat, please drink because it’s very important.


﻿
This is your tenth feature film. How have you grown as a director from the early days when you were doing commercials? What have you learned along the way?
When I was a child, I always had a camera. It wasn’t an iPhone but it was a very expensive camera. I wanted to be a director but I was realistic. My family is not from the movie industry. So I went to university and then after, I started working for some advertising companies. And then just for fun, I started to shoot a movie (short film). Then I did another one and really had great success. It won a lot of prizes all over Europe and throughout the world.. the United States, South America. It was just a 10-minute movie. Then a producer called me and said, I would like to make a very low budget, feature length film. The film is called Neapolitan Spell. It’s a small film, but lucky. It won a David di Donatello, Golden Globe, and Nastro d’Argento.. the most important Italian awards. Then I made another one and another one. I learned the technical part of advertising on the set shooting. I stayed on the set with very important directors that came from all over the world to shoot commercials in Italy, including Spike Lee. So I grew (as a filmmaker) on an advertising set. I didn’t attend film school. I just went for three weeks to the New York Film Academy.

What is it about the human condition that inspires you to tell these character-driven stories about flawed people just trying to get by in life?
I like weaknesses. I like a main character that is able to transmit an emotion. I’m not really interested in winners. I find them very boring. I like small characters who are able to do something great. I like a comedy that has emotion at its heart. I’m not looking for easy laughter. If a comedy isn’t able to move you, then I think it's a failure.

My last question is about the music in your films. You have beautiful hit songs by popular artists like Daniele Silvestri and Fiorella Mannoia. How do you feel about the relationship between music and film?
Film is about life and for me, music is about life. Life has happy moments and moments of sadness. If you think about it, every one of us has a special song that we associate with a happy or sad moment of life. So for me, they are inseparable. Music is deeply connected with the life of the person that I would like to have in my movie. I think that music could be an echo chamber to emotion.