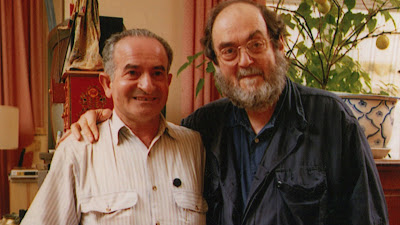 S is for Stanley opens in New York today. If there ever was a must-see documentary film, this is it.

S is for Stanley, the 2016 David di Donatello winner for Best Documentary, is an intimate story of friendship. It’s the story of the Italian behind the genius of Stanley Kubrick. Without giving the captivating twists and turns of the film away, director Alex Infascelli introduces Emilio D’Alessandro as a young Italian who moves to London to his life-changing introduction to Stanely Kubrick and then the lifetime of working as Kubrick’s right hand man from giving his opinions about actors (was not of fan of Jack Nicholson) to returning a jacket with a broken zipper to feeding the zoo of stray animals on Kubrick’s property to making a cameo role in the last film that Kubrick would make. If you are familiar with Kubrick’s work, this is a fascinating account of how his films came together. If you are not familiar with his work, this is a moving story of friendship and love.

In a director’s note, Infascelli had this to say about the project: “I first heard of Emilio D’Alessandro during an interview with Kubrick’s wife in their house near London. When I read his life story, I was so blown away that I decided I was going to be the one to put it to film. It’s been a beautiful journey that has gotten me very close to the incredible personalities of two men: one of which I thought I knew everything, only to discover I did not know a single thing, the other of which I didn’t know a thing but has left me speechless with his amazing anedoctes. Confronting a giant like Kubrick has been very frightening at the beginning; as I got deeper and deeper, I was scared I would spot Stanley in his underwear! But it did not happen: the grace and dignity with which Emilio recounts those years next to Stanley is moving and gives us the idea of the degree of closeness the two of them had reached. As a director, I decided to limit myself and be sort of a ‘wine decanter’, enhancing the true and full taste of this amazing story. There is one thing I am sure of: after seeing this documentary, watching a Kubrick film will never be the same.”

If you live in New York, do not miss the opportunity to see S is for Stanley, opening tonight at the IFC Center in Manhattan. Click here for the complete schedule.