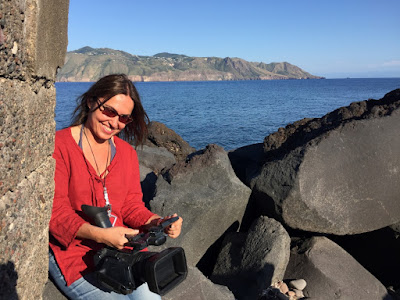 She was born into a family of filmmakers, grew up in the paradise of the Mediterranean and could have been a movie star. Instead, she chose to make meaningful documentaries on social issues, human rights and the legacy of cinema. If that wasn’t enough, she started a film festival in that paradise to give voice to other filmmakers, journalists and activists who share her vision.

Giovanna Taviani is the daughter of the legendary director, Vittorio Taviani and niece of Paolo Taviani, who are known as the filmmaking duo, the Taviani Brothers. Born in 1969, she had an early interest in literature and cinema, and today is considered a scholar of those subjects, having authored several essays. Among the topics of those essays were novelist Luigi Pirandello, the films of neorealism and the cinema of Luchino Visconti. When she was a teenager, she had a role in her father's 1984 film, Kaos but instead of pursuing acting as a career, opted for a life behind the camera as a director.

Through her work, Taviani explores the assimilation of immigrants and other relevant social issues. Her films have echoes of the great master of documentary filmmaking, Palermo-born Vittorio De Seta, who told stories of Sicily and its neighboring islands. On one hand, her work is raw like De Seta’s, giving it a neorealistic ambiance. On the other hand, the dramatic music scores composed by her brother Giuliano Taviani give them a fictional, Hollywood feel. Giuliano is an accomplished composer whose music has graced the films of Ferzan Ozpetek, Massimiliano Bruno, Francesco Munzi and of course, the Taviani Brothers. The Taviani offspring have followed their own paths but they occasionally come together with the patriarchs of the family to create important works.

One of those works is Giovanna Taviani’s Il Riscatto, which was inspired by a character in the Taviani Brothers’ documentary film, Caesar Must Die. That character Salvatore Striano took part in the Rebibbia Prison’s Shakespeare program while he was incarcerated. Upon his release, he began acting professionally and today is one of Italy’s leading men. Giovanna Taviani documented his plight in turning his life around and educating youngsters on the importance of culture, Shakespeare in particular, in order to avoid a life of crime.

In her film, Ritorni, (Returns), Taviani documents the return of immigrants to their homeland of  Maghreb, a region of western North Africa. The shooting took place during the sweltering summer holidays and radiates the heat of Africa, which can be interpreted as a metaphor for the blood, sweat and tears the immigrants shed in leaving their places of origin. The film offers different points-of-view of the significance of these homecomings, which in a sense are voyages in the opposite direction in comparison to the dangerous route that thousands of refugees make each year from the African coasts.

Her 2010 documentary, Fughe e approdi (Return to the Aeolian Islands), showcases the splendor of her stomping grounds where iconic cinema was created. Taviani visits the movie locations of several generations of Italian filmmakers, including Rossellini (Stromboli), Antonioni (L’Avventura) and the Taviani Brothers (Kaos). Revisiting these locations was clearly an emotional experience for Taviani as she recounts her memories of growing up there as well as the experiences of other filmmakers making their own masterpieces on these islands. 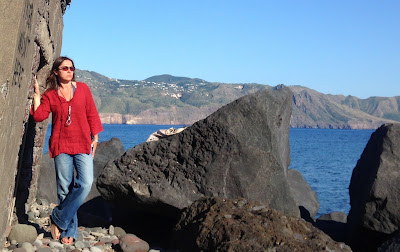 Although documentary filmmaking is one of her passions, she finds a great deal of joy in the annual film festival she founded more than a decade ago, the SalinaDocFest. Held on the island of Salina surrounded by breathtaking views of the Mediterranean Sea, the annual festival showcases documentaries and feature films with the theme of human rights. The festival has become a huge success with critics, filmmakers and the public. With each passing year, the festival grows, showcasing new productions of the narrative documentary made by promising young filmmakers.

Now in its 11th year, the SalinaDocFest will take place June 25 – 29 on its namesake Aeolian island. When she is not making arrangements for her festival, Taviani is working on her upcoming documentary about Sicilian storytellers in Palermo.