A Conversation with Director Roberto Andò 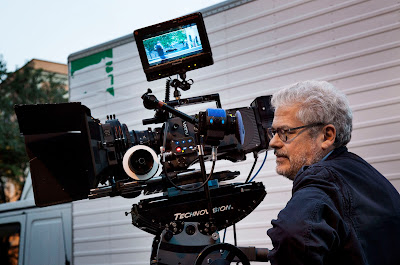 The political thriller blends money, power and politics to give a contemporary portrait of the effect of capitalism throughout the world and how a select few economists, lacking in moral ground, are worsening the lives of the weak for their own benefit. A monk is at the center of a suspicious death and through his silence and wisdom, calls out the corruption, leading a few to second guess their choices. Four languages are spoken in the film and several nations are represented. The screenplay was articulately written, equally distributing the responsibility of each nation.

I spoke with Roberto Andò while he was in New York presenting the film. I had a few questions in mind but instead we turned out having a great conversation on the chaos of world politics right now. He answered questions I had about Italy's new political party Movement 5 Stelle and gave me his perspective on the comparisons made between its leader Beppe Grillo and Donald Trump and why this all makes his film so relevant now.

*Spoiler Alert* Please keep in mind, if you will be seeing this film in Canada, our conversation contains plot twists.

Why did you want to tell this story? It's very timely for everything that's going on now throughout the world, especially here in the United States.
There was the idea to put together different worlds talking about how the world of politics has become completely concentrated. The other is the idea to have a central character, that is the monk, to shape different aspects like silence. He is not somebody that is clear. You can't understand who he is or where he's from. Of course he is a monk. You see that but during the movie, he's appearing like a visitor and then he is disappearing in the same way. And during the meeting, he is creating an atmosphere of mystery but with empathy, a sense of pity. What was interesting for me is that today, we are in a particular moment in our history. And we see that we have a world, a lot of money but in very few hands. This is something that is creating a lot of problems everywhere, also terrorism. But since the movie is not an essay. The idea was to have a group of people involved in politics during the meeting that are obliged to react to something unexpected. 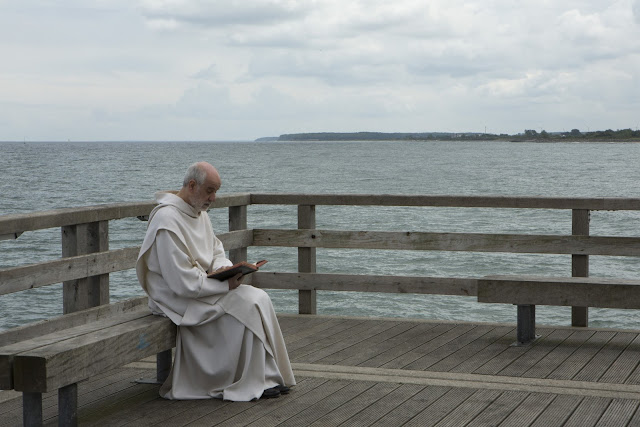 Do you mean the suicide?
Yes, the suicide first of all. And then after the suicide, the idea of what can be a suicide because suicide is always against something. Suicide is against somebody. There is an Italian poet Pavese who has said that suicide is always against somebody- against your mother, father, society. And so these people are obliged to understand. It's a kind of text to read, to analyze. And this monk is the only reference they have. So it's starting from this situation in which he is suspected and he's also bluffing. At the end, he isn't saying anything because he doesn't know.

He doesn't even know the secret.
No, and so the secret does not exist. What's interesting for me is the relation of the head of the monetary fund and all these people in relation to the sense of life that is coming from this man. The sense of pity. The sense of humanity and this is something that is giving them something new.

You work often with Toni Servillo. Tell me about your collaboration with him.
Well we are the same age. We started at the same time with theater. We come from theater, so I can relate well to him. He is always the first actor I think of for a story.

So you have him in mind when you're writing?
Yes, because I think he always brings something new to cinema. Toni is particular, in particular for this kind of story, in my movies that are concerning secrets and identity, double identity. He's perfect to tell this kind of story. He has this face in which you can also read something that is unsaid.

Now back to the timeliness of the story, when did you start writing?
I think it was just after the tour for Viva la liberta.

So about 2014/15?
Yes, and it was very strange because in some way when I finished this script, I had the feeling that it was really happening. And now, we are really in it. I was watching the coverage of the G7 summit in Sicily where there was a kind of psychodrama and so it's very interesting. There is something that is completely changing.

It was interesting in your film how it was said that the weak are the people that suffer from these executive economic decisions because that's what's happening now in America. With Trump's budget cuts, poor people would lose their healthcare and food benefits, senior citizens would lose programs that provide them with meals.
There was a kind of crash of trust everywhere but of course with the poor people. Also in England with Brexit and the election of Trump is a paradox because these poor people voted for him. In a way, he is taking the force from the left everywhere. There is no more left that is able to understand the root of the problem. They've come to accept a kind of "protocol medico". It's like medicine. There are no alternatives. This is the magic word for economy. There is no alternative. So he was very intelligent in some ways.

Maybe clever (furbo) is a better word!
Yes he's clever because he's using something real but with incredible arguments. So, it's a paradox. What is interesting for me is that the politics that I like are vanishing because now it's completely economic.

Journalists are comparing Italy's Movimento 5 Stelle to Trump's politics. What is your opinion on the comparisons between the two?
It's all one phenomenon. In Italy, we call it populism. It's a way to give a simple answer to a very difficult question.

What is Beppe Grillo's role in this. He seems to be more humble than our current president.
He cares about the democratic rules apparently. Then you discover that this movement is completely a monarch with a king that is deciding everything. Of course inside a movement like this, you can also find people that are honest and want to change something. So it's a very difficult moment because the situation is not clear. I think for this moment, Trump will have some space and then people will discover who he is.

I hope so.
For sure.

You put several powerful nations in this film. I really appreciated the different languages. How do you feel about a select powerful few making decisions that will greatly impact the world economy?
At the time when I was writing, there was a kind of one language, like a religion. The economy was a religion. It's the same thing. It's theology, free thinking. And now, you see with these different situations, there is a fight- Germany against the United States. So the most prominent in the world. In Europe, Germany is the richest country. But in some way, everything is changing. They have to deal with poor people. In the last 20 years, there was the idea that it was completely impossible to change something in the economy, like everywhere there should be the same situation. This is not true. So in this sense, Trump is smart because he is using a very vulgar way and it's an illusionistic way to speak to the people, to say something promising to help these people. And then it's not true because the lesson we see now is a lesson of egoism. If I was in politics, I couldn't meet (with him) anymore. It's not possible to speak with somebody that is taking a position like this. I hope here in the U.S. that it can start a discussion, a revolution. There should be a revolution. A great country cannot have a leader like this. 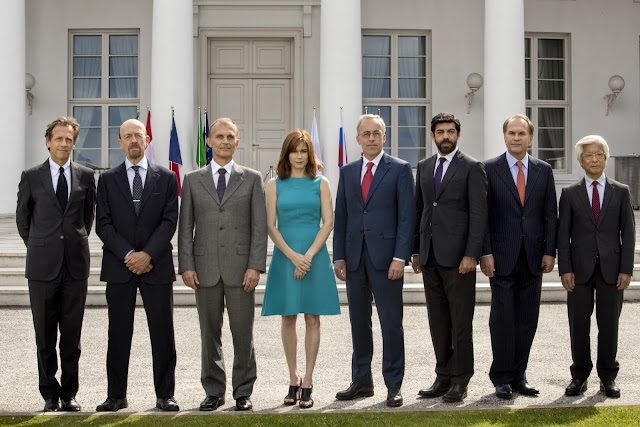 Your film is going to generate some great discussions in America.
I think it's a moment which is happening also in Italy, in Europe, in London. We have seen Brexit. There is this paradox. They don't have any protection from economics now. In the last twenty years, economics was the way you could do politics. There was not politics. There were only economic rules and there were all the same economic rules. Now that everything is completely separating, they are obliged to invent politics, to do something that is a real strategy. But remember that the film is not an essay. What is interesting in the movie is that everything is in relation to these people and the fact that in this hotel in which people are speaking of numbers, there is a tragic event, completely unexpected. What is interesting is the reaction from everyone. It's interesting that the women are able to understand. For example the prime minister of Canada is also an economist but she is with a doubt.

And she had a free spirit. I liked the symbolism with the animals.. the bird and the dog in particular. The dog understood there was something negative going on.
Yes because that's not political but inspired by St. Frances, a great master. He said that what we have, this continuous creation of the same object, is really something that is giving us the sense of life. And looking at that man, the monk, I see that it's possible to have another kind of sense of life and what is interesting for me is to create something that is not, that is destroying the one truth. Now we are living in one truth. It's a truth that is passing from economy- the sense of economy- the fact that it's so natural for us to live like this. But now it's completely difficult because of the climate, we have to take care of animals because they are part of our life.