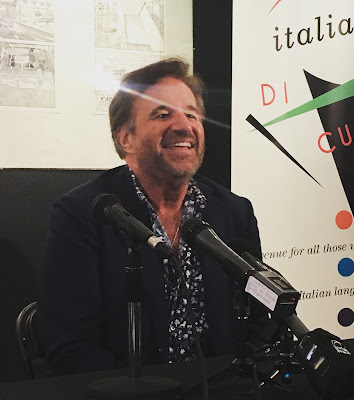 Christian De Sica was the guest of honor during Canada's 2017 Italian Contemporary Film Festival. A press conference took place at the Italian Cultural Institute of Toronto. Members of the international press in attendance asked a number of questions about his current films, future projects and beloved father Vittorio De Sica. Below are a few responses that I found interesting. Please pardon my wobbly camera.. I was not using a tripod.

The video clips are in Italian and the copy is the English translation.

I'll start by posting Christian De Sica's answer to my question, since I listed this post as an interview in the sidebar.

I asked him about the reception of his father's neorealist films in America when they were first shown here, if they were used as a history lesson to show the aftermath of post-war Italy and if they changed anything about the filmmaking process of American directors.
When my father came to the United States, he presented Shoeshine with an Italian producer. Howard Hughes wanted to meet him and put him up in the Bel-Air Hotel and then Hughes forgot about him. So my dad’s producer said "What the hell am I doing here?".. Then Merle Oberon organized a screening of Shoeshine for U.S. aristocracy. She had helped to finance The Bicycle Thieves and other Italian films. Charlie Chaplin was there, Judy Garland was there.. all the Hollywood royalty. Then my dad asked Chaplin at the end, "What did you think of my film?".. He said, "The film is wonderful but you have to get out of here because it’s too soon. The film Is too early. It won’t have any success in America because we’re not ready for this type of cinema." David Lean asked him, "How were you able to shoot on the street?" David Lee would go on to do Lawrence of Arabia. So our cinema, Italian cinema, was ahead of other international film styles. For example, Scorsese has screened a lot of neorealism films by Rossellini, Visconti and De Sica. Those films changed our way of doing cinema. John Schleshenger who made Midnight Cowboy made a film in the neorealist tradition by shooting on the street with Dustin Hoffman and  Jon Voight. It was the first American film that was completely different. It told the truth of what happens today at the time as opposed to what happens in the saloons of billionaires that don’t really exist. It made people dream but they don’t actually exist in real life. So the Italian cinema really influenced world cinema.

Talking about the films he presented at the festival and the next generation of filmmakers in the De Sica family...
I’m showing two films of mine: Poveri ma Ricchi (Poor but Rich) and Fräulein – Una fiaba d’inverno (Fräulein – A Winter Tale). They are very different from each other. The film Poveri ma ricchi was third behind Ficara and Picone’s {L'Ora Legale} and Felicità with Alessandro Siani with whom I made Il principe abusivo, which I did three years ago in theater and now the film with him. In July, we’re making the sequel for Poveri ma ricchi. It will be called Poveri ma ricchissimo (Poor but Very Rich). My films usually do very well at Christmas and Poveri ma ricchi did very well whereas Fräulein – Una fiaba d’inverno made no money at all. They told me, don’t make a film with a debutant but Caterina Carone is a wonderful director. She has an excellent future and we have Lucia Maschino, who is a great actress. We presented the film with only 12 copies, so it was a big gamble. My nephew Andrea, the son of my brother Manuel, just made a film I figli della notte that is now being shown in Italian theaters. My son Brando graduated from USC and is directing his very first feature film. So we have a family of filmmakers. It’s important for me to support young people and to help them out, even if people have told me don’t work with a newbie. I’ve played many characters- misogynists, scoundrels, rascals, sexists, male chauvinists, tricksters and fraudster but in Fräulein – Una fiaba d’inverno, I play a sweet older man. It’s not a love story. It’s a friendship between my character and a 40-year-old woman. It’s a very special story written by a woman. Women have a very strong sensibility and they’re also honorable in the way they manage to live with us men. It was a great satisfaction.

His work on American productions...
This year, I worked on a series by Amazon, which for some reason, is not being released in Canada. It’s called Mozart in the Jungle. We did five episodes with Gael García Bernal, Monica Bellucci plays my wife and Placido Domingo plays himself. We have Malcom Mac Donald, and the great Broadway actress Bernadette Peters. It was released on Sky Italia and in the United States where it was very successful. We shot in Venice. For some reason, every time I work with Americans, I end up in Venice. A few years ago, I did The Tourist wiith Angelina Jolie and Johnny Depp and it was shot in Venice. Now I did this series for Amazon. I hope it will be released in Canada. If it is, I hope you’ll see it because it’s truly wonderful.
(Click on the title to watch the series)


Talking about neorealism and his father Vittorio De Sica..
Tonight I’m going to present Marriage Italian-Style, which was adapted from a play by Edoardo De Filippo. Now you know my father of course from Pane, Amore, Fantasia. You know him from being an actor in the 1930s with the white telephones (telefoni bianchi films). You know him of course for his neorealist films The Bicycle Thief, The Roof, Gold of Naples, Two Women and so forth.. a wonderful series of films that renewed cinema around the world. I spoke with Martin Scorsese and he told me that he screened neorealist films many times in the United States because prior to neorealism, films were only shot in studios, not on the street. So, we were the first to make films on the street with non-professional actors as opposed to actors who studied at an academy of fine arts or theater. With regard to Marriage Italian Style, it’s very different from my father’s typical films. It’s a Carlo Ponti film. He was the producer. He made it for his wife Sophia Loren who had won an Oscar for Two Women. Marriage Italian Style was a big hit in Italy. We can say that it’s the last film that can be connected to the Golden Age of neorealism. Sophia Loren was nominated for an Oscar but she didn’t win because she won the year before. And if you haven’t seen the film, I hope you’ll watch it tonight. It’s an exceptional film. There’s a great chemistry between Marcello Mastroianni and Sophia. It’s unforgettable. There are also a lot of wonderful Neapolitan actors like Tecla Scarano who plays the maid for Sophia Loren. In Italy, we easily forget the great talented actors like Anna Magnani for instance, who isn’t talked about very much lately. So every time I have the opportunity to present these wonderful older films, I’m always happy, it’s like a party to me. And of course to present Marriage Italian Style, it’s always a pleasure and an honor to talk about my father.

Tells a funny story about his father shooting Ieri oggi domani on the streets of Napoli.. I’ll tell you a little anecdote regarding my dad.. He had to film on the streets.. and filming on the streets of Naples is virtually impossible because there are always thousands of kids and women screaming. So it’s quite the extraordinary feat. But perhaps with my father’s authority.. and the respect and love that people had for him, he was able to obtain silence. He was shooting the film, "Yesterday, Today and Tomorrow" with Marcello and Sophia in a popular neighborhood called Toledo. There was chaos, a thousand people screaming. So my dad picks up the microphone and starts talking in his imposing voice-
“Ladies and Gentlemen, this is Vittorio De Sica speaking”
-Everybody is quiet-
“I’m about to shoot a scene with Sophia Loren and Marcello Mastroianni. I need two minutes of silence.”
-Everybody is quiet-
“Rolling, camera, action”.. They do the scene.
“Cut.”
Then he picks the microphone up.. “Thank you very much.”
Then a thousand people say at once- “You’re welcome.”