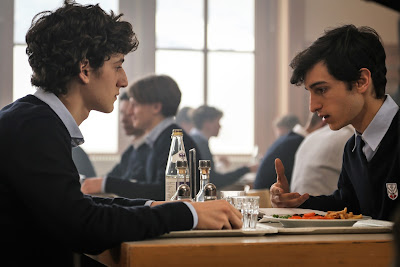 It's just been announced that director Andrea De Sica won the Nastro d'Argento award for Best Debut. His film "I figli della notte" (Children of the Night) is a spectacular first feature, so it's a much-deserved honor.
"I figli della notte" is the story of an unlikely friendship between Giulio and Edoardo that is born in an all-boys boarding school nestled in the secluded mountains of northern Italy. The two discover a nightclub hidden in the surrounding forest. One thing leads to another and they manage to get themselves into some serious trouble. One can interpret that each boy has his own set of problems, which stem from belonging to families of wealth. They are dropped off against their will and forced to live in an environment that isn't always emotionally healthy, especially for a teenager. The articulate script blended with the energetic, but mysterious music score add a strong element of suspense and keep you at the edge of your seat right up until the end.

Andrea De Sica recently presented the film in New York at Lincoln Center's annual series "Open Roads: New Italian Cinema". I caught up with him and asked him about his first feature film and the cinematic legacy of his iconic family.

First, I have to compliment you because your film is really an exceptional first feature. How did you prepare as a director to take on a feature after making short films and series?
The preparation was long and it began when I was a child. I come from a family of cinema, I had my first experience on the set when I was 10-years-old. We say that I don't have a single memory that is not attached to cinema!
I read that the main character was inspired by someone you knew in real life. Could you tell me more about how that experience influenced the character?
L. had been three years in boarding school, and had just moved back to Rome when we met. A shy kid, very well mannered, always better-dressed then everyone. His presence was hardly noticed, he was very discreet, he almost seemed a shadow; when we met for the first time and I asked him who he was, he answered "no one".
A guy wronged him regarding a girl and L. went to see him at home. The guy was found face down in a pool of blood on the sidewalk. Charges for attempted murder were pressed against L.; he never spoke a word of what he had done, not even to boast. Under his seraphic and reserved aura was hidden a killer's instinct.

E. at fifteen had already ran away from home three times in order to avoid the parents he hated. He had done just about everything: shoplifter, hobo, window cleaner. When you spoke to him it was like listening to a thirty-year-old in a fifteen-year-old's body. He was energetic, completely anarchic. In spite of coming from a very rich family, experience had taught him how to survive in every situation. And most of all he was joyful. There was never a pinch of sadness in his stories; he also had been in boarding school in the past, and he missed it in some ways: there he had met his greatest friends, that he would never see again after that experience.

These two aptitudes, a romantic one and the other ruthless, were translated into the construction of the two protagonists. Two opposite personalities: Giulio and Edoardo.. 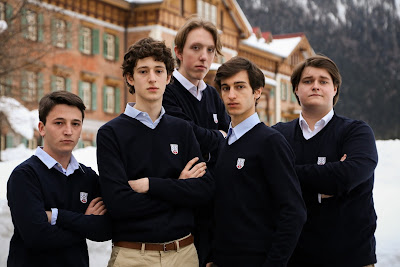 Why did you choose to shoot in the region of Alto Adige? Do the snow and mountains have a particular significance to the story?
I made the decision along with my producers because I was searching for a place that was completely isolated. But I didn't want to make a film in the realistic setting of an actual school. I wanted something that would communicate in images the state of the characters' souls. So I chose to set it in a grand hotel of the late 19th century.

We are connected on social media and I see from time to time that you publish stories about your grandfather. You seem to embrace your family’s cinema legacy and the fact that your grandfather made some of the most beautiful films in the history of filmmaking. What are your feelings on belonging to this type of cinema royalty?
I am very proud. I am a great admirer of ALL the members of my family. At the same time, I needed time to find my own path. "I Figli della" notte was the moment in which I said,
“Cari tutti, vi saluto. E’ ora che vada per la mia strada.” (Goodbye my dears. The time has come for me to take my own road."

How did you approach that road of making your own film- balancing that kind of master filmmaking while telling a story of your generation?
I did it with great joy and fun. I believe to have made my own interpretations of the films I watched as a teenager. I saw the films of Kubrick, Spielberg and Lynch, and I was fascinated with them in the face of their sacred depictions.

You dedicated your film to your father, which was such a beautiful gesture and actually gave me the chills. Can you tell me something about what you learned from him in regard to both filmmaking and in life? How does he stay with you and influence you today? And also, were you inspired by your father’s work to compose your own soundtrack?
"Dellamorte Dellamore" (Cemetery Man) by Michele Soavi. But he did not like electronic music much, which often made us argue. In reality, when he passed away, I realized that I did not want anyone else to do the music, so I learned to do it alone.. totally instinctive and irrational.

I see qualities of neorealism in the work of many young Italian filmmakers, especially when funding is minimal. They rely more on the poignancy of the stories rather than effects or elaborate sets. I believe that this is part of your grandfather’s legacy. Do you also see his filmmaking living on in the new generations of filmmakers?
Yes, absolutely. My grandfather and his colleagues have paved a road that will always be valid at any time and latitude.

Have you begun to think about your next project?
Yes! This time, it will be a true horror film!

There's no immediate word on international distribution of the this film. We will keep you posted. In the meantime, various past projects by Andrea De Sica are available on YouTube and Vimeo.
at July 01, 2017