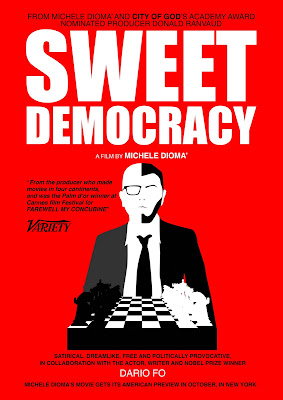 I remember reading a beautiful article by the New York Times in October of 2016 when playwright Dario Fo passed away. It was one of the most comprehensive obituaries I had ever read and it sparked my curiosity about Fo's life and what inspired him to write such moving, controversial works.

The Times article stated that Dario Fo "was best known for two works: Accidental Death of an Anarchist (1970), a play based on the case of an Italian railroad worker who was either thrown or fell from the upper story of a Milan police station while being questioned on suspicion of terrorism; and his one-man show Mistero Buffo (Comic Mystery), written in 1969 and frequently revised and updated in the decades that followed, taking wild comic aim at politics and especially religion. After a 1977 version of Mistero Buffo was broadcast in Italy, the Vatican denounced it as 'the most blasphemous show in the history of television.' The church’s attitude toward Mr. Fo had not mellowed a generation later, when he was awarded the Nobel. 'Giving the prize to someone who is also the author of questionable works is beyond imagination,' the Vatican newspaper L’Osservatore Romano said."

Dario Fo was born in 1926 in Sangiano, a comune in the region Lombardy, located about 40 miles from Milan. He joined the fascist army of Mussolini's Repubblica Sociale Italiana. When the war ended, he was was accused of collaborating with the fascist regime and spent a few months in prison. However, he was a supporter of the Italian Communist Party, even helping his father smuggle refugees and Jewish scientists to safety in Switzerland. Those few months in prison would not be the end of the abuse he endured for his political beliefs and the work they inspired.

After meeting his wife, Franca Rame, in the early 1950s, the two began to collaborate. Their creations received mixed reviews that ranged from praise to outrage. "We’ve had to endure abuse, assaults by the police, insults from the right-thinking and violence,” Mr. Fo said in his Nobel lecture. According to the Times article, "The worst episode occurred in 1973 — after a Fo play criticizing the police was presented in Milan — when his wife was kidnapped, tortured and raped by a fascist group later found to have links to members of the carabinieri, the Italian federal police."

Fo would go on to write more than 80 plays, many of them with his wife. Their satirical style was inspired by the commedia dell'arte genre. The couple put on thousands of plays and performances in diverse venues across Italy, which included theaters, factories, universities, parks, and prisons.

One year after Fo's death, filmmaker Michele Diomà presented his film Sweet Democracy in New York at the annual series Italy on Screen Today. Sweet Democracy offers an interesting look into modern day politics and the new type of "celebrity politician". In the age of Trump politics with all the sensationalism and fake news claims, there's no better time to have this discussion. Diomà features many scenes with Dario Fo offering his take on politics, revolution and society. The film is a sharp aberration from your typical commercial release being that many audio and visual effects were added in post-production as well as the over-the-top style of acting. The perfect storm of peculiar performances and effects may seem baffling at times, but everything comes full circle in the unexpected ending.

Michele Diomà and I have been connected on social media for years. He was kind enough to take the time to answer my questions about his experience working with Dario Fo and presenting this clever film in New York.

First, what is the message you wanted to communicate with Sweet Democracy?
I wanted to return to a time when cinema was a free voice. Unfortunately, in Italian mainstream cinema, which is run in part by politicians, the meritocracy and freedom of expression principle have been destroyed. There are not many showings of Italian films anymore, which should be considered a public crisis but is not being reported. I consider Sweet Democracy the first step in achieving a revolution in the Italian film production system. The model could be that of independent American cinema, which is competitive in the market.

Tell me about the world you created within this film… in regard to the editing of the sound effects, colors, close-ups, slow motion, looking directly into the camera.. and then the laugh track.
Sweet Democracy is definitely a film with a particular style. This was my goal. Many believe that cinema has already been made in all styles and languages, but I think there is much more to discover and Sweet Democracy is proof.

How did Dario Fo become involved with the project?
When I told our co-producer Donald Ranvaud, recipient of four Oscar nominations for the "City of God" masterpiece, that I wanted to have Dario Fo in Sweet Democracy, he was enthusiastic. While we both feared that it would not be an easy feat, like all great artists, Dario Fo was immediately available.

Tell me about your experience with him?
Our collaboration was one of the most beautiful gifts that I received in my life. Thanks to the presence of Dario Fo, I am certain of having made an immortal film, which will be studied forever in universities around the world. I was very lucky.

Explain to me your personal significance of having him in the film..
For me, having made a film with Dario Fo, was like a young singer playing with Bruce Springsteen. Dario Fo, in addition to winning the Nobel Prize for his greatness as a dramatist, also had a fundamental social and political role in Italian history. Together with his wife, actress and writer Franca Rame, he was persecuted for decades by those who wanted to censor him.

Were his lines part of the script or did he answer the questions in his own words?
(I had the impression that he was speaking from his own experience.)
Dario Fo freely answered all the questions. Even in editing, I did not alter his thinking. I wanted Dario Fo in my film because it was necessary to place a free intellectual at the center of the project and in Italy there are not many.

Tell me about your experience presenting the film in New York at Italy on Screen Today.
Bringing the film to New York was an important milestone. I was curious to find out how the American public would react to a satire film on the Italian political system. I must say that it was a success, also because many viewers told me after the screening that certain aspects of my film tell a reality of politics also present in the United States. Of course, all this was possible thanks also to the exceptional cast of Sweet Democracy, having been able to work with actors like Renato Scarpa, which we remember from the masterpiece The postman by Michael Radford next to the unforgettable Massimo Troisi, in addition to the talented Antonello Pascale, a thirty-year-old actor that the New York public generously compared to the immense Charlie Chaplin.

What can you tell me about your next film? Will you be shooting in New York next week?
Yes, I can confirm that I'm trying to shoot my first film in English and in New York. Everything is still TOP SECRET, but I can reveal that it will be a union between two film cultures, that of the history of the great New York independent cinema, from Sidney Lumet to Martin Scorsese, with the history of Italian cinema, which was in the 50s and '70 the most original in the world. My goal is to return to the free and international Italian cinema. I will succeed.

We'll let you know when Sweet Democracy becomes available with subtitles. through Michele Diomà's YouTube account. This version does not have English subtitles. In the meantime... here is one clip in English.