Visual Artist and Filmmaker Gaetano Russo Driven by the Moon, Fire and Wine of Basilicata 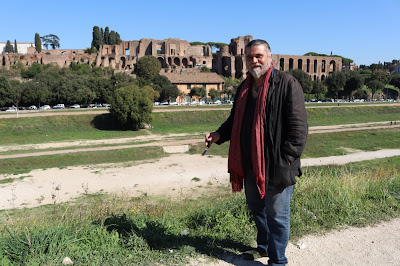 The big news in Basilicata this week is making the New York Times list of 52 places to go in 2018. Pictured in the article with a nice write-up is Matera. While this ancient stone city is stunning and should be on everyone’s list of places to visit, there are so many other treasures across the region of Basilicata.

Also referred to by its ancient name, Lucania, the region is divided into two provinces: Potenza and Matera. While Matera gets a lot of attention for the Sassi district, the abandoned town of Craco and the beaches and Greek ruins of Metaponto, the province of Potenza has its own breathtaking spots such as the Dolomite mountains, Pollino National Park and the seaside town of Maratea, nicknamed the pearl of the Tyrrhenian.

Little known, especially here in America, is a vast land of vineyards located in the province of Potenza. Many of these vineyards are located in various towns surrounding the great Monte Vulture, a dormant volcano, which houses two small lakes. The grape known in this region is called Aglianico and produces world renowned red and white wine. Towns and communities surrounding the Monte Vulture, including Rionero in Vulture, Barile, Ripacandida and Venosa, are home to some of the region’s most prolific wine producers.

Enter Gaetano Russo, an accomplished artist, sculptor, set designer and filmmaker. Although he doesn’t consider himself a director because he’s only experimented with a few short films, those films are beautiful vignettes. They recount a rich land that has been the muse for many artists and writers through the centuries. But more importantly, to the people who call it home, it is life.

The first short film that caught my attention was Russo's 2010 documentary La Vendemmia Notturna. Set in Rionero in Vulture, Russo interviews local winemakers and the mayor about the cutting edge technology mixed with old world tradition that produces the renowned varieties of Aglianico wines. Russo conducts his interviews right on the vineyards and takes his camera inside the factory to show the new processes of winemaking. However, he also tells of the old traditions, including the immersion of a premature baby in a warm bath of Aglianico wine. A remedy that dates back several generations, the warm Aglianico is believed to give the baby the sensation of being in the mother's womb.

The film also shows an annual wine festival that takes place in Rionero In Vulture. The Aglianica Wine Festival usually takes place in the main piazza of Rionero in Vulture, Piazza Fortunato, and features numerous varieties of Aglianico wine produced by area wineries and cantinas.

Watch La Vendemmia Notturna. The film is in Italian without English subtitles, but the images and direction are self-explanatory, so it's quite easy to follow.

While shooting La Vendemmia Notturna, Russo was told about the healing properties of the Aglianico grape for people who grew up on the land of the vineyards. They just couldn’t survive after long periods of being away. When they fell ill, they were brought back to the vineyards to breathe the air and to drink the wine... Then they would recover.

Russo first told me about this film, which he titled Luna Divini, a play on words. The literal translation is Moon of the wine or simply Wine Moon, which you will understand after seeing the film. We met back in October when I interviewed him in ancient Rome at Circo Massimo near the Baths of Caracalla, just down the street from the Colosseum. I thought it was a fitting spot to talk about the history of Basilicata and how it inspires him artistically.

Speaking about his discovery of this ritual featured in the film, Russo told me about the land of Rionero in Vulture surrounding the majestic Monte Vulture. “In these places where there are marvelous vineyards, I discovered something during the shooting of my short film (La Vendemmia Notturna), a little project that I directed. Luna Divina is set in a vineyard because the film speaks of a grandfather that was dying but then saved by this wine, Aglianico. He couldn’t breathe until after he was brought back to this land by his grandchildren. I transformed the story into a film completely about women instead of making it about the grandfather. The moral of the story is- those who hide (stay away from the vineyards) are not able to live.”

After seeing the film and the lead character's strong reaction as she participates in the stomping of the grapes, I thought she had lost her baby. But Russo explained to me that she didn’t lose the baby. Instead, she lost a part of herself because after giving birth, she stayed in her home to care for the infant and hadn’t returned to the vineyards. So, that evening during the stomping of the grapes when she finally left the house, she reconnected with the land and as Russo said, “The fire, the wine and the moon made her collapse. But she collapsed from the joy she felt because the emptiness she had inside disappeared as soon as her feet touched the land, giving her a sense of inner peace and serenity.”

Watch Luna Divina... There is no dialogue in this film, which speaks to the skillful direction and talent of Gaetano Russo.

There is an expression that people from Basilicata use to express their pride for their southern roots- "Orgoglio Lucano". When I interview filmmakers from the region, I usually ask them what the term means to them. When I asked Russo, he had to think about it because the term has profound meaning for him. Later, he sent me a message. “If you want to write about my real lucano pride, it is my family, especially my nieces and nephews... and all the children of Lucania to whom I wish a bright future. They are our main resource, and our most precious. For this reason, I am grateful to my brother Michele who has dedicated his life to them and to cinema.” 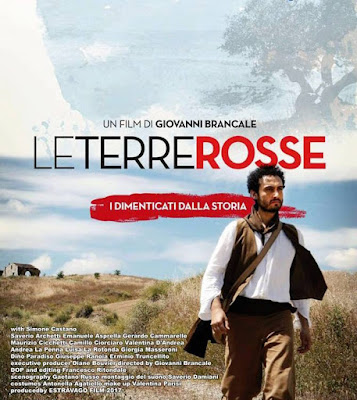 In addition to organizing occasional art exhibits and traveling through the region supporting his brother, director Michele Russo, and other young filmmakers, he is a set designer and art teacher. His latest film for which he did the set design, Le Terre Rosse, recently premiered in Italy and has received some great reviews in the press. Scenes were also shot in Rionero in Vulture, which is slowly but surely becoming a set cinematografico. Actress Ornella Muti just wrapped up shooting the film, Wine to Love in the vineyards surrounding Monte Vulture and the upcoming 2018 release Lucania was also recently shot in Rionero and the surrounding countryside of Basilicata. The film has an all-star cast, which includes a few regional actors as well. We'll keep you posted on its release date. In the meantime, click here to watch the trailer for Le Terre Rosse (with English subtitles).

For more information on Gaetano Russo, check out his YouTube channel where many his projects have been posted. He also just started a residence for artists. Click here to visit the Facebook page.
at January 14, 2018