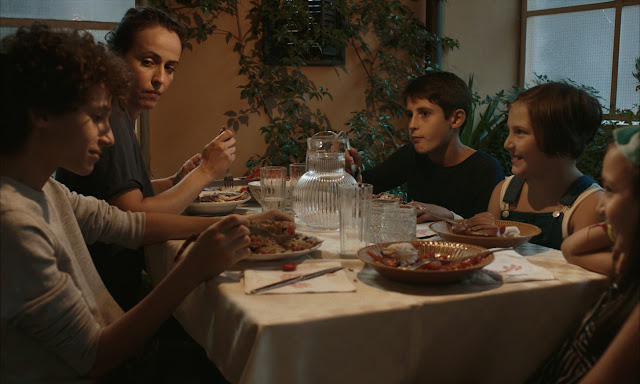 Last week, we revisited a film in the Culinary Cinema section of the 2014 Berlin International Film Festival. Today, we talk with a young director whose short film also centers around food, but will be featured in the Generation Kplus section of this year's festival.

Devoted to children and young people, the Generation section of the festival began in 1978. Divided into two competitions: Generation Kplus and Generation 14plus, the section offers a global perspective through the eyes of young people. This year, the Generation program will spotlight filmmakers who "create their own realities and bring the contradictions inherent in the fragile reality of the adult world to light."

One Italian film will be featured in this year's program. Gregorio Franchetti's Cena d'aragoste (Lobster Dinner) is a story of how friendship is influenced by economic and social borders. When a 12-year-old boy takes lobster from his home to the single working class mother of his school friend, the dynamic of their friendship begins to change.

The film was Gregorio Franchetti's thesis project during his studies at Columbia University. The young filmmaker began his work in cinema as a camera assistant on independent films in New York City. He made the tough decision to leave that position in order to enroll in the university's MFA program. Fascinated by the subject of the film and the fact that such a young filmmaker could be invited to present his film in an arena so revered as the Berlin International Film Festival, I contacted Franchetti to learn more about his experience making the film and the message he wants to convey. What I found was an articulate artist with a clear idea of what he wants to communicate through the medium of cinema.

First, tell me something about yourself… How many films have you made?
I made two narrative short films. Lobster Dinner is a screenplay I wrote in my second year at Columbia University, which I then shot in Rome as my thesis film. I wanted to be a film director since my mid teens. I don’t have a particular moment or movie that ‘changed my life' but if I have to name one that stuck with me as an example of the possibilities of cinema when I was still very young it would be the film Nashville by Robert Altman. I have also been influenced by the work of Nanni Moretti and later by Maurice Pialat.

I haven't seen the film but I read a bit about the story of Lobster Dinner. What is the message you want to communicate about these two boys.. Does it involve the social class issues of Rome or Italy as a country?
It does involve class issues. The two boys go to the same school and hang out with the same friends. There is however a deep class awareness in their respective families that comes with strong boundaries, prejudice, and a mutual feeling of malaise. The two boys have already incorporated that in the way they see and feel about each other, but don’t know it yet. The quality of being integrated in the school system but very distant at home is something I felt very strongly growing up in Rome, and things don’t seem to have a chance to change with the way Italy has dealt with the economic crisis. Even though our material lifestyles are likely to converge, the deeper class fractures that divide us are quietly increasing.

The subject of the “quest for manhood”, as I read in a description of the film, seems complex for a 14-minute short.. How were you able to express yourself on this subject in such a short time frame?
That is certainly a disproportionally big journey for a short, or for any film for that matter. I think what it intended to suggest is that the story is set in a moment in which the kids are becoming increasingly aware of their quest for manhood. In this context, a previously innocent gesture like that of bringing some prelibate food as a gift awakens a set of unprecedented feelings that force the two boys to see each other no longer as allies but as competitors.

Was it challenging to direct two young protagonists?
At the beginning yes. I was nervous about how to create a relationship of both friendship and respect with the young actors. It’s a hard middle ground to find. Kids are trained to be very perceptive of our weaknesses, so you have to be very direct and not hide yourself. Also, you have to forget about fitting your idea of the character on top of the kid like its a costume or something. Sometimes you see films where kids have the most absurd dialogue lines, things that were written in the screenplay for them and that they never would say in a million years. I am very sensitive to that when I watch young protagonist movies and it really takes me out. The hardest part is the casting, but once on set I tried to trust the kid more than the character. It has some risks for your story but, once you learn how to handle them, it’s great, and directing kids actually becomes a lot of fun. They are the first ones to come up with an amazing gesture, line or idea that you would never have thought about and that might be just perfect for your scene, or for a new one.

What are your plans for the Berlinale? Will the cast accompany you to the screening?
Yes, we are trying to bring both Matteo and Edoardo to the Berlinale for the premiere of the film. They can only do one of the four screenings because of school. But it will be great fun. As for me, I am very excited that the film will be screened in such an amazing festival and hope to take the opportunity to bring attention and possibly money to a feature film I am preparing, which is another story about a friendship, but this time of two young women who have left their country together and become part of the huge expat community of Italians in the UK.
at February 04, 2018