A Conversation with Actor- Luca Calvani from Warner Bros. Upcoming Release "The Man from U.N.C.L.E."

A few years ago, I interviewed actor, Luca Calvani on the occasion of his U.S. release, When in Rome. Today, we are revisiting our conversation as he is promoting his much anticipated spy thriller, The Man from U.N.C.L.E. Directed by Guy Ritchie, the all-star cast includes Henry Cavill, Armie Hammer, Alicia Vikander, Elizabeth Debicki, Jared Harris, and Hugh Grant. Based on the television series by Sam Rolfe, the story is set in the 1960's and follows CIA agent Napoleon Solo and KGB operative Illya Kuryakin as they participate in a joint mission against a mysterious criminal organization, which is working to proliferate nuclear weapons. ﻿﻿The U.S. release date is set for August 14, but the cast recently did some press for the film in the Eternal City, where much of it was shot. 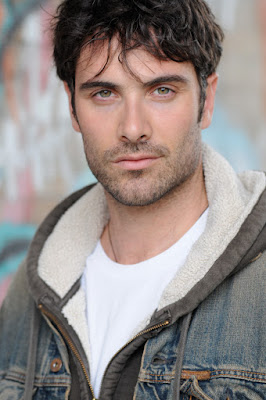 Born in Tuscany, Calvani has traveled the world following his career. He began working as a model in the 1990's before studying acting. That chapter of his career has lead him to both the big and small screen. He's worked with many top Italian directors including  Davide Marengo, Riccardo Milani and Ferzan Ozpetek, and even appeared on the hit HBO show, Sex & the City and the CBS soap opera, As the World Turns.  During our interview, we talked about the early days of his career in New York City, his experience working on both sides of the Atlantic and his role in Disney's When in Rome.

How did you get into acting?
When I first moved to New York in the 90s, I worked in the textile business and I also modeled. After four years, a friend of mine, Justin Chambers, who went on to Grey’s Anatomy, suggested that I take an acting class. I was already curious about acting. The town I come from in Italy doesn’t offer much in terms of acting, but I did work a bit in theater and I was in school plays. I never thought that I could make a career out of acting, though.

You played the role of Dante Grimaldi on the soap opera, As the World Turns. Tell me about that experience. Did you enjoy working on a soap opera?
It was a great experience to work on a daily basis!  I thought, ‘Wow I can actually do this for a living.’ I was also doing some guest appearances on Sex & The City around that time. On As the World Turns, I played a villain, which meant that I had to observe other actors because there is a certain way of playing this kind of role. There are tricks of the trade that you have to learn. I worked on the show from May – September of 2001. Then I moved to Los Angeles for a while.

What was it like to work with Ferzan Ozpetek on his 2001 film, Le fate ignoranti?
Ozpetek is a great director, a genius. It was an intense experience for me because I was just starting out. It was my first movie and I was working with this big ensemble cast of very established actors, so at times I felt a little lost and a little lonesome.

How does the experience of working on an Italian film differ from that of working on an American film?
Well now I’ve been working for a while in Italy, so people know me there and they have an opinion about me. I am not so known to American audiences, so I find it liberating not to be recognizable. The environment when working on an American film is much more relaxed and professional. There’s also such a wide range of characters to play in America, so many different genres of films. I do my audition tapes in Italy and send them via internet, so when I go to the studio, my camera guys are excited to see what kind of audition we’ll be doing that day. When I auditioned for the movie, Surrogate, I was thinking how I could be robotic. During the When in Rome shoot, we just had so much fun. I worked with some big caliber actors on that film, and they always made feel comfortable. It seemed like I had always worked with them. We went out to dinner every night together and just laughed and had such a great time. When we were shooting the Italy scenes, it was like a big road trip. American productions are like a big machine, very hands on at every level from production to publicity. In Italy, people tend to keep to themselves.﻿﻿

Speaking of that “Guido” character, there has recently been some controversy with an MTV show here in the United States with their portrayal of Italian Americans. How do you feel about the stereotype that many Mafia films and television shows in the U.S. portray?
I think that The Sopranos crystallized the portrayal of Italian Americans in the U.S. and people should take distance. MTV is trying to sell commercials, and in Reality TV, nothing sells better than a good fight. It’s a bad judgment call made by the producers, the studios and the kids on the show. Those types of shows  send a wrong message and should be taken with a grain of salt.

When In Rome is your second American release in a year. Now that you’re working more and more outside of Italy, are there any directors that you’d like to work with in the future?
Oh, there are so many. I really like Sam Mendez. He is a brilliant director. I loved his film, Away We Go. It was beautiful and delicate. I’d also like to work with Wes Anderson. He’s one of my favorite directors. He belongs to that independent school of filmmaking. There are many others, too. So, I’m really looking forward to seeing how it all plays out.

The Man from U.N.C.L.E. is scheduled for release on August 14. In the meantime, check out the trailer-

Email ThisBlogThis!Share to TwitterShare to FacebookShare to Pinterest
Labels: Ferzan Ozpetek, Le fate ignoranti, Luca Calvani, The Man from U.N.C.L.E., When in Rome