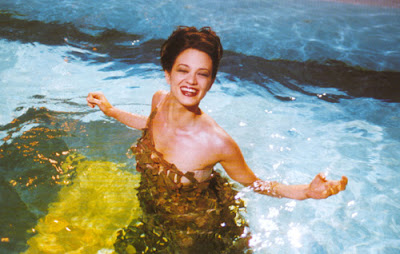 It's just been announced that Asia Argento's 2000 film Scarlet Diva was acquired by the American distribution company, Film Movement.

According to Luce Cinecitta's website, FilmItalia, the story of Scarlet Diva centers on Anna Battista, a young film star with a difficult past. Her mother and brother died from drug and alcohol abuse. Anna lives a nomadic life travelling between Rome, Paris, London, Amsterdam and Los Angeles in a continuous whirl of auditions, appearances and awards ceremonies. The truth of the matter is that Anna is lonely and on the edge of oblivion. Love is always only sex for her and all her relationships are drug-driven and very degrading. During a stopover in Paris, she meets Kirk (Shepherd) a young Australian musician and she falls in true love.

Kirk goes on a long tour and Anna discovers that she is pregnant. She decides to keep the baby but cannot break with her world and all its vices. During a continuous flashback, Anna relives the death of her brother, her childhood fears and the discovery of her body and sex.

Anna does not want to act anymore - she writes a screenplay for a film. An important American producer fools her into believing that he will put up the money. He lures her to an appointment and tries to rape her - yet another traumatic experience. Anna slips further down the slippery path trying out the newest drugs in a self-destructive "trip". At the end of the film, seven months have gone by and she is visibly pregnant. Kirk returns to Paris for a concert and Anna wants to see him again. But more problems and shocking revelations await her and the end is an open conclusion.

Argento has said that one scene in particular was inspired by an encounter with Harvey Weinstein, who invited her to his hotel room when she was 21-years-old. He allegedly forced her onto the bed, begging for a massage. He then performed oral sex on her as she told him to stop.

During the last year, Argento has been a leading voice in the #MeToo movement despite vicious attacks by the Italian media. The story of Scarlet Diva is more relevant than ever, so we'll keep you posted on when and where it will be shown.
at May 05, 2018