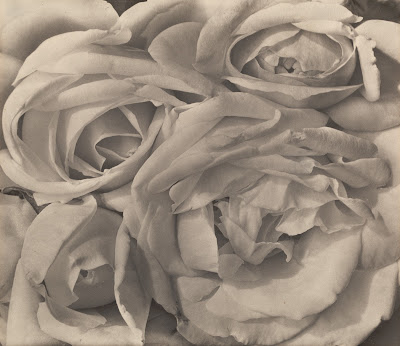 I recently stumbled upon the photography of silent film actress Tina Modotti and it's absolutely mesmerizing.

Modotti was born in 1896 in the northern Italian city of Udine and  immigrated to the United States in 1913. She headed to San Francesco where her father had arrived earlier. There, she became involved in the performing arts and landed parts in plays, operas and silent films.

Modotti was ahead of her time and a true working woman on the move. During the course of her life, she worked as a photographer, model, actress and political activist. She moved to Mexico City in the early 1920s and dedicated her life to political activism where she eventually joined the Mexican Communist Party. Her life thrived in Mexico City and her close circle of friends included artists Frida Kahlo and Diego Rivera and Chilean poet Pablo Neruda.

Modotti died at the age of 45 of congestive heart failure while on her way home in a cab. Neruda wrote the epitaph for her grave stone:
Pure your gentle name, pure your fragile life,
bees, shadows, fire, snow, silence and foam,
combined with steel and wire and
pollen to make up your firm
and delicate being.

Click here to browse a collection of her photographs organized by the Museum of Modern Art in New York. Click here to read about the miniseries that will be made about her life with Monica Bellucci in the starring role and Edoardo De Angelis in the director's chair.

Watch Tina Modotti in this restored version of The Tiger's Coat...