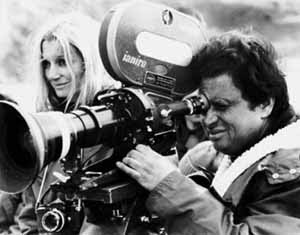 His documentary films have given voice to a people who would have otherwise been forgotten while preserving rituals and traditions no longer practiced. Visually stunning and emotionally moving, they reflect an Italy we’re not used to seeing in cinema.

Born in Naples in 1926, Luigi Di Gianni captured a dimension of Italy that people outside the South didn’t even know existed. He began his career working in the region of Basilicata, which back then was referred to as Lucania. He first visited the region with his parents when he was a boy. His father, being from the Lucanian village of Pescopagano, wanted to show his son his homeland.

That trip made an impression on the 9-year-old and created a deep affection that would one day inspire him to return. “I always remained very emotional about returning to this part of my homeland of Lucania,” he says. “It seemed like a different planet compared to Rome, where I lived. The tiring journey, the unpaved roads, the difficulties in getting there by bus: Everything remained etched in my memory and in my heart.”

With the help of author Ernesto de Martino, who was traveling to the region on an anthropological study, Di Gianni made his first documentary in 1958. "Magia Lucana" went on to win Best Documentary at the 19th Venice Film Festival.

Through the medium of cinema, Di Gianni explored and documented the extreme poverty that existed in the ’50s and ’60s. The rarity of his subject matter works in concert with his dramatic, slightly dark musical soundtracks to create a truly unique cinematic experience.

His films show a strong, resilient people who somehow managed to endure “una stanchezza senza speranza” (an exhaustion without hope). In the first few films he shot in Lucania, we’re immersed in a desolate landscape whose denizens tirelessly work the land against the strong, silent backdrop of mountains, sea and olive trees. But as physically spent as they are, these people have a sense of determination that you can see in their eyes as well as their actions as they work with their neighbors, families and beasts of burden to scratch out a living and make Basilicata the treasure it is today.

Di Gianni also ventured with his crews into neighboring Campania, Puglia and Calabria, where he documented the traditions and hardships of those regions, drawing attention to the plight of the Southerners and preserving their culture on film.

Among the many documentaries Di Gianni shot in the region of Campania is the fascinating 1962 film "Grazia e numeri," which explores the relationship between the citizens of Naples and the “anime pezzentelle” interred in the Fontanelle Cemetery. For the most part, the corpses contained in the cemetery belonged to the victims of a plague that swept across Italy in 1656 and a cholera epidemic that struck in 1836. With their remains abandoned and their souls trapped between heaven and earth, they were piled in large numbers into an underground graveyard. These bones eventually attracted the compassion of the living, who descended into the cemetery to establish a relationship with the souls who once animated them. Di Gianni takes us into this subterranean world, where the faithful recite prayers and visit with their adoptive spirits. This unique phenomenon is simultaneously creepy and loving: bodies abandoned in death due to disease that are cared for by the living through prayer. Outside these crypts, we make our way through the streets of 1962 Naples as the locals go about their lives. "Grazia e numeri" is a stirring and insightful glimpse into the soul of the South, both present and past, during that period.

Di Gianni’s 1967 "Tempo di raccolta" (Harvest Time) documents a day in the life of Calabrese women as they work in the olive groves of the region. The simple but stunning beauty of those majestic centuries-old trees, Di Gianni’s choice of traditional music, and the play of sun and shadow during those autumn days turn the film into a visual and aural symphony. The generations of women working together, with the older ones filling the baskets and the younger ones lifting them atop their heads and carrying them off, present a picture of contentment. At lunch, they feast on bread, tomatoes, olive oil and wine before heading back to the groves, baskets in hand. A manned lift arrives to shake the tree loose of its fruits, and the morning routine repeats itself. The women return home in the evening to enjoy dinner as the family gathers around the table for spaghetti. They tuck the children into bed, the dawn returns, and they head back out to do it all over again.

The 1965 film "Il male di San Donato" (The Evil of San Donato) was shot during the month of August in a village near the southern tip of Puglia. The opening shots of the whitewashed buildings and empty streets capture the tranquility of a scorching summer day in southern Italy. Then, suddenly, we are faced with the “evil” referenced in the title. “The film takes place during the ceremony of the Feast of San Donato, protector of the village of Montesano in Salento, which back then was a part of Lecce,” Di Gianni explains. “During the event, people were seized by restlessness, epilepsy, powers of madness, because the saint, San Donato, is the protector of madmen and epileptics, and the village was invaded by this evil.” The film focuses on a number of possessed villagers who, with the help of their neighbors, overcome the powers that have taken hold of them. The phenomenon featured in the film no longer occurs today, so the film is now of great historical value. The village showed its appreciation by recently granting Di Gianni honorary citizenship.

Throughout his life, Di Gianni maintained his enthusiasm for the South and talked about shooting these films in great detail with vivid recollections and precious memories. Regarding his unintentional historic contribution, “I am not a director who operated in a scientific sense. I saw scientific opportunities and then went with my imagination, and I felt those worlds with my participation. I shot a documentary about the Madonna del Pollino that concerns Calabria and Lucania, and I lived great emotional moments. I witnessed some very particular behaviors as people were crawling on the ground with their tongue out and when they carried their animals into the church in front of the Madonna. There was an incredible relationship, a very strong bond with this Madonna. I don’t consider myself a believer or a non-believer, but there were moments in which these episodes deeply touched me and sometimes I participated. Sometimes I cried with them.” 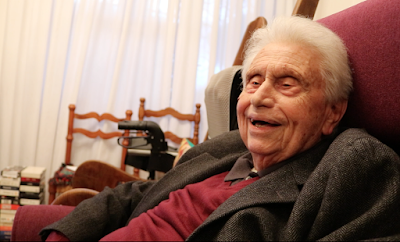 Luigi Di Gianni passed away in May of 2019. My short documentary, "Luigi Di Gianni: Soul of the South," which traces his filmmaking in southern Italy, premiered at the Sedicicorto Film Festival near Bologna, Italy in October of 2019 and was also shown at the Rome Independent Film Festival, Cortodino Film Festival Dino De Laurentiis in Naples and Little Rock Italian Film Festival in Arkansas as well as various online festivals where it was awarded Best Script and Best Documentary. Click here to watch it.

Click here to watch Luigi Di Gianni in my 2018 documentary "Return to Lucania."