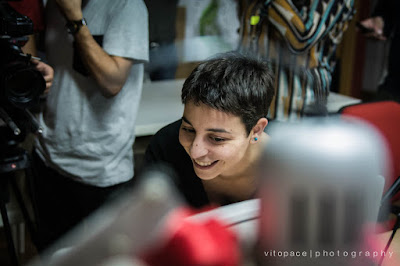 After honing her skills in Rome, she returned to her native region to conjure 3D worlds that bring history to life.

Sara Lo Russo was raised in Potenza, the capital of Basilicata, where she attended college and majored in journalism. Upon graduating, she moved to Rome where she held a position as a news coordinator. Living outside the region allowed her to grow personally and professionally, but she longed to return home and cast a contemporary light upon her region.

So she headed back to Potenza and partnered with engineer and 3D technician Michele Scioscia. With the help of the Lucana Film Commission, they founded Effenove, a film production and visual effects company. 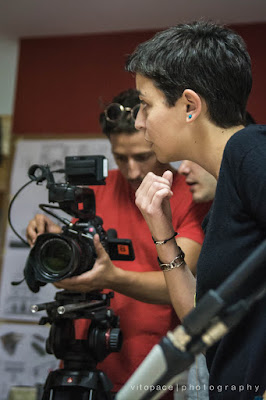 “We specialize in 3D computer graphics,” says Lo Russo. “For us, technology is a tool, not the end, and 3D allows us to add a different language to the way we talk about Basilicata and its stories.”

Effenove literally means F9. As Lo Russo explains, “When Michele and I were trying to come up with a name for our production house, he suggested Effenove because the F9 key is what you press after a long processing of data entry before getting the final image.”

In pursuit of that final image, the artists of Effenove use drones with 4K resolution and SLR/digital cameras to shoot the real word (monuments, landscapes, people) and transform them into 3D models. Using highly sophisticated software, they create stunningly realistic virtual worlds that you enter via computer.

Lo Russo takes a documentary-style approach aimed at making Basilicata interesting and relevant to young audiences. The goal is to engage them and to teach them the history of the region. The most recent example is “Inventum,” an interactive game that is available through the Apple Store and Google Play. But there’s a catch. You can only play the game at the location in which it is set: the Archaeological Park of Venosa.

Steeped in history, the park’s ancient ruins, which date back to 291 B.C., were once inhabited by wealthy Romans who relaxed in the thermal baths and watched shows in the amphitheater. Underneath the ruins are ancient Jewish catacombs. Now a museum, visitors learn about the Jewish population that occupied the area during the last centuries of the Roman Empire. The Effenove app brings this world to life through the magic of 3D animation.

“Basilicata is definitely a natural set. From the sea to the mountains to the wheat and the sky, the landscapes are extraordinary. However, the reason for staying here are the actual stories. A place can be as beautiful as you want, but if there are no strong stories to tell, the place is just a set,” Lo Russo explains.

Until recently, the region of Basilicata was most often described as poor, desolate and hard to reach. With the designation of Matera as the 2019 European Capital of Culture, the world seems to be catching on to the region’s modern side. And while younger residents appreciate and respect the writers and directors who once used the land as their muse and movie set, they feel the need to move on from the antiquated stereotypes they now perpetuate. “(Pier Paolo) Pasolini, (Francesco) Rosi and Carlo Levi gave a lot to Basilicata, but we run the risk of getting stuck in that kind of image,” Lo Russo says. “Basilicata today is much more. There is so much technology. There is so much future, and there is a great desire for the future. Just locate the right tools and start building that future.”

Watch a clip from our interview....

Clips from Effenove projects can be viewed online at www.effenove.it. Effenove is also on Vimeo and social media, in particular Instagram, where clips are posted regularly. Click here to watch Sara Lo Russo in my documentary Return to Lucania.

-Written by Jeannine Guilyard for the series "Basilicata: Land of Cinema." Published in the November 2018 edition of Fra Noi Magazine, Chicago.
at November 18, 2018