A Look at the Sacred Architecture of the Sassi of Matera 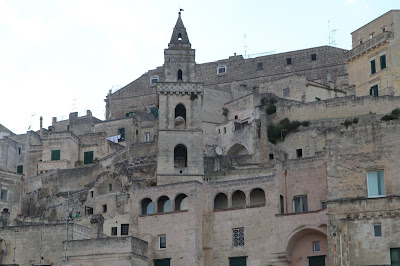 To mark the beginning of Holy Week, I made a video highlighting the sacred architecture of the Sassi of Matera, the 2019 European Capital of Culture and natural set for numerous films, including the next James Bond film.

The video shows the the Sassi of Matera and the Park of the Rupestrian Churches. Below is my script, which I put together as a result of my research on various websites including UNESCO. Most of the pictures were taken by me during my trips to Matera. I grabbed a few extras on Wikipedia to fill the five minute running time of the video.

According to UNESCO, the Sassi of Matera and the Park of the Rupestrian Churches is the most outstanding, intact example of a troglodyte settlement in the Mediterranean region. Located in the southern Italian region of Basilicata, The Sassi and the Park of the Rupestrian Churches of Matera consists of a complex of houses, churches, monasteries and hermitages built into natural caves. The area was first occupied during the Paleolithic period and shows evidence of continuous human occupation through several millennia until the present day, and is harmoniously integrated into the natural terrain and ecosystem.


The Church of Santa Maria de Idris and San Giovanni in Monterrone are connected to one another, located on a rocky outcrop called Monterrone.

The Church of Santa Maria de Idris dates from the 14th and 15th centuries.

Santa Maria de Idris, connects to the Crypt of San Giovanni in Monterrone through a passage. There are delicate frescoes in the crypt which were created during the 12th - 17th centuries. (Photos are not allowed to be taken in the crypt. I downloaded the photos in the video from the UNESCO world heritage and Oltre Arte Matera, a coop dedicated to art in the city of Matera.)

The cathedral was built in the 13th century on the ridge that forms the highest point of the city of Matera.

It was originally built in 1300. The front is in baroque style and presents three portals. Over each portal there is a statue. They show the Madonna of Mercy, St. Peter and St. Paul.

San Pietro Caveoso is situated at the edge of a ravine with a view of the old cave dwellings.

Below is a view of the Sasso Caveoso (neighborhood) looking east. The church of the Madonna de Idris is on top of the rock in the centre. 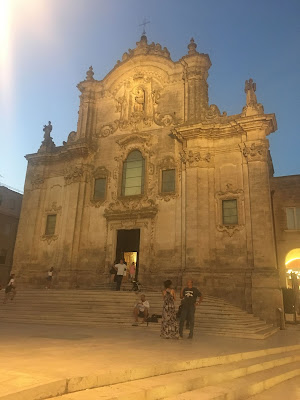 St. Francis of Assisi was built in the thirteenth century but the famous Baroque façade was constructed in the eighteenth century.

The church underwent several changes before taking on its present-day appearance.

It is situated in a very popular part of the city- at the end of Via del Corso and the beginning of Via Ridola, the entrance to a large and busy piazza.

The ornate interior consists of a single nave with two side chapels.