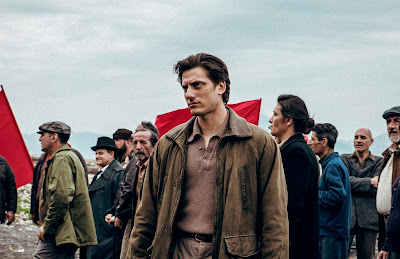 Adapted from the novel by Jack London, "Martin Eden" is the story of an unskilled laborer. When he meets Elena, the daughter of a wealthy industrial family, it's love at first sight. So as not to feel inferior to Elena's upper class lifestyle, he sets into motion his dreams of becoming a writer, hoping that it will help him rise above his humble origins. The steps he takes in achieving his goals turn out to change his life and his perspective. He experiences a "political awakening" and questions Elena's bourgeois world.

The film made its world premiere at the 2019 Venice Film Festival and was recently shown at the New York Film Festival. That's where we caught up with the director, Pietro Marcello. He talked about his Italian adaption of an American novel and why he immediately had actor Luca Marinelli in mind to play the title role.

Tell us about the challenges of adapting a book for cinema..
It was a very free transposition of "Martin Eden." The Italian "Martin Eden" tells the story of Naples, of the south of Italy. The European "Martin Eden" was like a free passage because we don't have the culture of the sea. We don't have an Atlantic Ocean or a Pacific Ocean. We have Pasolini and Carlo Levi. We have another kind of literature. We have the Mediterranean style. Our Martin Eden is more of a Countryman, more of a peasant, more southern- Martin Eden of the South. A book is a book in the sense that it (the film) will never be able to rise so high as in the novel. Together with the screenwriter Maurizio Braucci, we tell a story that is universal, that could be adapted anywhere. It’s a story of redemption, that of Martini Eden, an archetype like Hamlet or like Faust.

What would you like for the audience to take away after seeing this film?
I would like the film to be seen by young people who can understand the possibility of redemption, the redemption of all of those who have not had privileges and experiences that were formed in schools but through everyday life. This is a bit of a metaphor for Martin Eden. It’s a film about the twentieth century and is the story of Martin Eden, and of those in the twentieth century.

Martin Eden suffers after having a political awaking. He suffers from anxiety.
Yes because it's a very contemporary story in the sense that it's a bit of Jack London's story- because Jack London becomes a victim of the cultural industry, modern mass literature. And Martin Eden himself represents this becoming a victim of himself who no longer relates to reality. This is why he becomes a hero. We are with him while he breezes through life but when he becomes a writer, he becomes confused and falls victim to his own individualism, and his vision of the world.

What was it like working with your lead actor?
It was extraordinary. I thought of Luca Marinelli from the first moment because I needed a person capable of being able to transform himself into the film inside this parable of a sub-proletariat to become a writer. Luca Marinelli was the right person for this.