Rome's Biblioteca Nazionale (National Central Library) is a treasure trove of information on the most prolific figures of Italian literature. The latest addition to the vast collection of artifacts and writings is a permanent exhibit that pays homage to the great intellectual, novelist, doctor and painter Carlo Levi.

Located inside the Spazi900 museum, next to the Sala Pasolini, is the exhibit dedicated to the author of Christ Stopped at Eboli, the book that inspired the 1979 epic film by Francesco Rosi. The realization of the exhibit was made possible thanks to a collaboration between the library and the Carlo Levi Foundation of Rome, which resulted in a loan of six paintings created by the maestro. According to an official statement by the library, the goal of the exhibit is "to promote and disseminate the multifaceted personality of Carlo Levi in ​​his dual role of painter and writer."

I visited the exhibit recently with Calabrese actor Fortunato Verducci. We met there to talk about his varied career in music and cinema as well as his role in the upcoming series, ZeroZeroZero. We entered the main room, which features a self-portrait created by Levi in 1936. The work is displayed on the original easel of his studio, which not only refers to the iconography of the artist, but represents one of the turning points in Levi's pictorial and personal life: his exile in Lucania. The experience, which lasted from August 1935 to May 1936, marked a change both in painting with a new pictorial approach, the "wave" brushstroke, to writing the book that made him famous throughout the world, Christ stopped at Eboli. From that experience of exile, Levi's attention was drawn to the peasant world, enclosed in ancestral traditions, recounted in Christ and stopped at Eboli, testimony and denunciation of the difficult living conditions of southern Italy, amidst poverty and authentic human values. The work was written in Florence during the German occupation, and was published in 1945.

Watch this clip from my documentary Return to Lucania in which the mayor of Castelmezzano, Italy in Basilicata talks about Levi's exile there..

The first edition of Levi's book is exhibited, together with two autographed letters written during the exile to Anna Maria Mazzucchelli, editor of the magazine Casabella.


Levi created portraits of his literary friends upon his return from Lucania. One of them, Eugenio Montale, favorably reviewed Christ stopped at Eboli. Montale's portrait is exhibited in the space along with those of Cesare Pavese, Italo Calvino and Rocco Scotellaro, proof of Levi's literary relations and of his lively participation in the cultural environment of the time.

In a museum of literature, the attention given to Levi's pictorial work accentuates two famous writers - Montale and Calvino - authors featured in the Spazi900 and present in the Writers' Gallery, while in the center of the Stanza of Elsa (Morante) is a portrait of Morante signed by Levi. (I can tell you that it is simply awe-inspiring to be in the presence of artifacts that speak to the friendship of these iconic writers.)

Even in the post-war period, Levi's attention to the Lucanian peasant world remained constant, as shown by his lasting friendship with the young poet Rocco Scotellaro, represented in the exhibit with a charcoal on paper. After the untimely death of Scotellaro, Levi not only wrote the preface for his posthumous novel, L'uva puttanella, but recounted his death in the painting Lamento for Rocco Scotellaro and in the famous Lucania '61 canvas, which is on display at the Museo di Palazzo Lanfranchi in Matera. 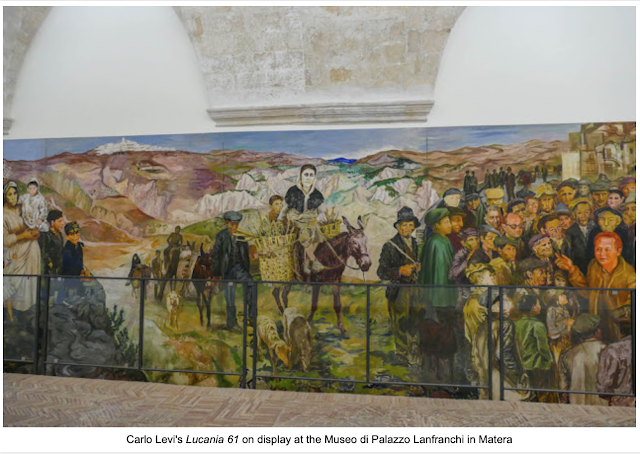