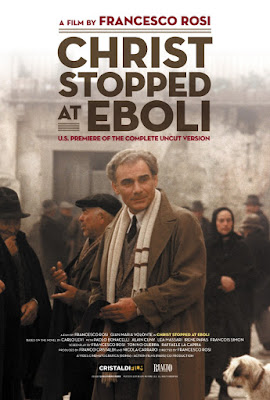 The story and landscape of Lucania are in the spotlight during the month of April. A rare, uncut version of Francesco Rosi’s 1979 film Christ Stopped at Eboli is being shown at the Film Forum in New York City’s West Village. The screenplay was adapted from the book by Carlo Levi, a doctor, writer and painter from Torino who was exiled to the southern region of Lucania (today, Basilicata) because of his political beliefs.The year was 1935 and Benito Mussolini's Fascist Party was in power. Levi was forced into exile due to the silencing of those who spoke out against fascism.

The uncut version is divided into four parts and lasts approximately four hours. The most striking difference from the two hour version is the visual decadence. The cinematographer, Pasquale De Santis, brother of director Giuseppe De Santis (Bitter Rice) was a longtime collaborator of Francesco Rosi. It's obvious from the composition of the shots and the long pans of the unique Lucanian landscape that much research and location scouting was done prior to filming. Francesco Rosi had a clear talent for expressing the human spirit and the plight of the underdog as he also did in films like Salvatore Giuliano, Tre Fratelli and Lucky Luciano. He could show the beauty of a people and culture without glamorizing them.. and their hardship without demoralizing them. He so eloquently achieved this in Christ Stopped at Eboli. The richness of the lighting gives allure to the impoverished surroundings and the striking natural landscape accented with olive trees and wild flowers gives a sense of affluence and abundance.

Christ Stopped at Eboli begins with Levi (Gian Maria Volontè) years after returning home. Lost in his nostalgia for the peasant culture he grew to love, he gazes at the portraits he created. This moment of reminiscing turns into a flashback of his first day arriving in southern Italy. The tale begins at the rail station in Eboli, a town located in Basilicata’s neighboring region of Campania. As Levi decends from the locomotive, he sees an abandoned dog with a sign around his neck asking whoever finds him to take care of him. Unbeknownst to Levi, the dog follows him and Levi decides to keep him, naming him Barone. 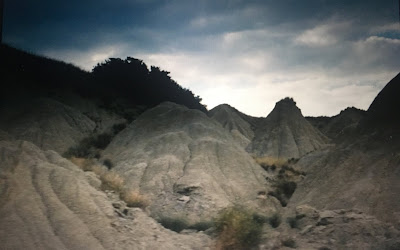 As Levi transfers to a small bus in the town of Pisticci, we see a shot of a calanchi mountain range, which is a signature part of the sprawling landscape of this part of Basilicata. The shot eventually widens to show the details of the magnificent calanchi situated upon the rugged terrain. Consisting of clay, and formed by erosion due to wind and rain, the literal translation of calanchi is "badlands." In Basilicata, they've often been described as resembling the surface of the moon.

As the vehicle approaches the hilltop town, Levi is visibly shocked and saddened to see the extreme poverty and desolation of the region. After spending an afternoon walking through his new town, Gagliano, the differences from the North are immediately apparent. They are not just physical differences, but also differences in behavior and culture. It's worth mentioning that the actual town in which the film was shot is Aliano. Gagliano is a fictional name. 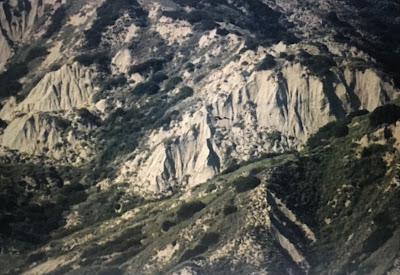 The second part opens with a bird flying eloquently along the calanchi. Making use of the spectacular  natural set that is Basilicata, Rosi does not hold back. The region is nicknamed “Land of Cinema” because so many directors have shot there through the decades and clearly Rosi's creativity ran rampant among the infinite wilderness and ancient stone structures. Levi spends his time trying to ease the culture shock by exploring his new surroundings and talking with the inhabitants of the town, asking them many questions. Although he has not practiced medicine, he earned his degree and as far as they're concerned, that qualifies him to treat them whenever they fall ill, which turns out to be quite often.

In the third part of the film, Levi's affection for his new friends grows stronger as does his appreciation for the plight of the peasant. He reads about the centuries of battles that hardened their hearts and broke their spirits. However, as tragic as the story is, there is an underlying humor. This is a strong characteristic of the lucani. No matter how bad things get, they always maintain their sense of humor and sense of hope. Anyone who has spent time in the region will notice this quality right away. As one of those people, the most powerful line for me came when Levi was sending his sister off after a visit. “Truth is I’ve always felt like I lived here.” There is something so warm and welcoming about the people of Lucania, they make you feel like you've known them all your life. 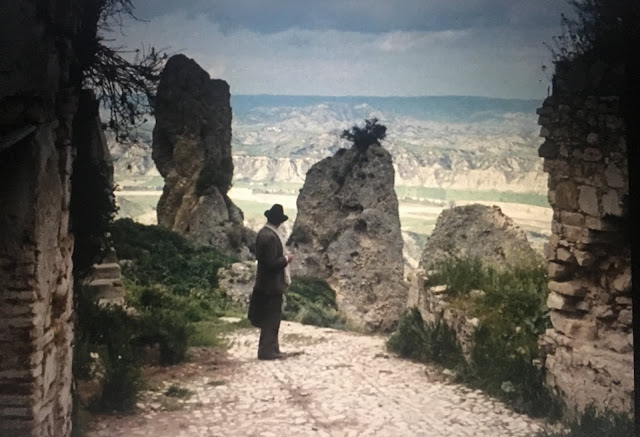 As the film winds down in the last part, Levi's affection for the peasants turns into a strong bond that forever changes him. Perhaps the most moving scene in the film comes as he departs in the rain and his dear friends and their children follow the car on foot reaching in through the open window to shake his hand and wish him well. This is where Gian Maria Volontè the actor metamorphoses into Carlo Levi. It's as if Volontè himself became attached to the lucani while he was shooting the film and empathizes with Levi's heartbreak in leaving them. 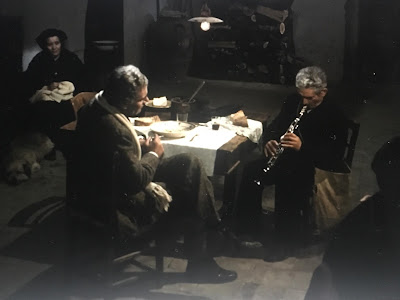 Levi's infamous book was published in 1945, nearly a decade after his departure. Although he promised his friends in Aliano that he would one day return, it is said that he never did make it back there during his life. He did, however, in death. The Aliano cemetery that we see him visit in the film is his eternal resting place, and his paintings are on display at the Museo di Palazzo Lanfranchi in nearby Matera. In the film, his sister described the Sassi (Stone City) of Matera as a "crater full of caves" with "20,000 men and animals crammed together" and "a city destroyed by the plague." That stone city today is the 2019 European Capital of Culture and the region of Basilicata was #3 on the New York Times list of 52 places to visit in 2018.

Veteran documentary filmmaker Luigi Di Gianni, who shot his films upon the very ground that Levi once walked, told me in a 2016 interview, “That world of peasants was marvelous. It was a world of extreme poverty but with values and with an unparalleled beauty and wonder that is no longer found.” This is the essence of Rosi’s film- an accurate and moving interpretation of Levi’s book, which expresses his love, admiration and respect for a people that endured centuries of hardships.


Click here to read my interview with a young scholar from Lucania about the Siege of Melfi which Levi talked about in the film and the lasting effect the 16th century battle had on the South of Italy. Then, young people from Basilicata talk about Carlo Levi's legacy and how Lucania has changed with the times to become a contemporary society. For more information on the social economic evolution of Lucania, I invite you to watch my documentary, "Return to Lucania," a finalist in the 2018 Russo Brothers Italian American Film Forum.

Click here to purchase a 2K restoration of the film that just became available by the Criterion Collection.

Click on the link below to purchase the book, which I recommend reading before seeing the film.

Here is a link to purchase the original 2-hour release on DVD, which can be interesting to see prior to seeing the 4-hour, uncut version..