Director Michele Diomà's talks with us about his film 'Dance With Me Again Heywood!' 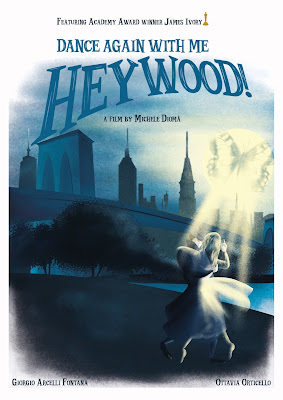 Director Michele Diomà's new film, Dance With Me Again Heywood!, starring novelist James Ivory, made its world premiere in New York as a Special Event at the 2019 edition of N.I.C.E. (New Italian Cinema Events) in November.

The story centers on Heywood, a poet who works several jobs to make ends meet. He lives a lonely life with two homeless men as his only friends until an expected encounter changes everything. One morning, he meets a woman suffering from "Moon Butterfly Syndrome”, a condition that makes her invisible to everyone except carriers of the syndrome, such as himself. The two start seeing each other, often to dance the waltz on a Manhattan rooftop. At the same time, Heywood starts wondering whether he'll be able to ignore the prejudice cast upon him by people who could only see a man talking to himself on the streets, while in fact he was with this invisible woman. Heywood's challenge to muster up the courage to be himself and not worry about the opinions of others is the very core of this New York fairy tale, a film that combines two narrative threads while honoring the history of cinema thanks to the presence of James Ivory.

Italian Cinema Today's New York correspondent, Lucia Grillo, had a spirited conversation with Diomà about some unique elements of the film while he was there presenting it.