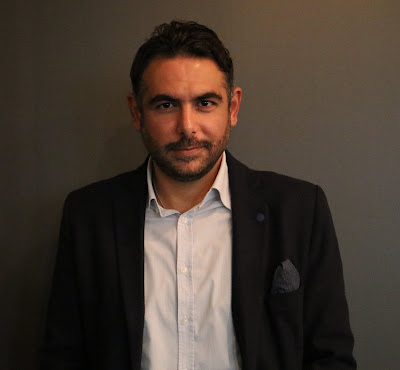 Fortunato Verduci made a name for himself in his native Calabria as a musician specializing in traditional folk songs. One day, he received a call to audition for an American production being shot on location in his region. Three years later, he is responsible for helping to create some of the most memorable scenes in television, which thanks to VOD platforms like Netflix and Amazon, represent Calabria on the international stage.

Born in the Calabrian commune of Motta San Giovanni, located on a mountain top overlooking the Ionian sea, Verduci was raised by a family of musicians. “I grew up to the sound of the tarantella and since I was a child. I’ve accompanied my father with the Motta folk group to play and dance around Italy and Europe. The dance facilitated me in acting because I was used to performing in front of the audience.”

Verduci didn’t initially have plans to pursue an acting career. A few years ago, word got around that an international film crew was shooting in the mountains of Calabria and looking for locals. He received a call to audition for a part as a musician playing traditional music. “I went with four other guys to the casting call, which was held in Praia a Mare (in the province of Cosenza, Calabria). That’s where I met the director. We did the audition and we danced. He liked it right away. We explained to him the significance of the dance, our regional tarantella, and the symbolism it holds in Calabria,” he recalls.

The director was Emanuele Crialese, best known in America for The Golden Door. The international production was FX Network’s series "Trust," which recounts the 1973 kidnapping of John Paul Getty III. The episode, titled, "In the Name of the Father," shot entirely on location in Calabria, was hailed by The New York Times as the best episode of the series. “Aside from having this small role, I had the chance to dance with all of these other actors, including Luca Marinelli, Donatella Finocchiaro and Francesco Colella. They learned our tarantella. They took dance lessons in the afternoon and then we all gathered on the set in the evening. The scene took us about two hours to shoot. The most beautiful part was the human interaction with the actors, engaging with each other on a human level, not just professional.”

Watch a clip from our interview in Rome in which he talks about the filming of that scene..

Watch "Trust," Episode 8, "In the Name of the Father" on Hulu, YouTube, Amazon Prime, Sling and Google Play.

Crialese was impressed with Verduci’s work and recommended him to other filmmakers. So before long, more offers came rolling in. The next project, "Lo spietato" (The Ruthless), a film by director Renato De Maria who is known for his depictions of historical events, called on the traditional music of Verduci’s Calabrian roots once again. Like "Trust," the film touches on the infamous kidnappings that plagued Italy during the 1970s and '80s as well as the rise of the crime organization ‘Ndrangheta. Verduci’s scene, which features his signature music and dance, offers a beautiful cultural respite from an otherwise heavy and violent story.

Watch "The Ruthless" on Netflix.

Verduci’s third and latest work is Stefano Sollima’s screen adaptation of "ZeroZeroZero." The series is based on the bestselling novel by Roberto Saviano, which explores the roads of organized crime from South America to Europe.

“One of the scenes I took part in was shot during the procession of the Madonna of Polsi. In that scene, I sing and play a song dedicated to the Madonna,” recounts Verduci. The scene to which his is referring was shot at the actual sanctuary of the Madonna. Located in the Aspromonte mountains of Calabria, the sanctuary was founded in 1144 and has become a sacred place for the people of the region. Although the series focuses on the brutal reality and consequences of organized crime, the scenes shot in Calabria reveal the region’s purity, beauty and rich culture. “The bearers of the statue of the Madonna were the real ones, that historically in that feast are from Calabria. So these were the actual bearers of Bagnara Calabra, a town near Scilla,” explained Verduci.

Watch this video of Verduci on set performing with his fellow musicians...