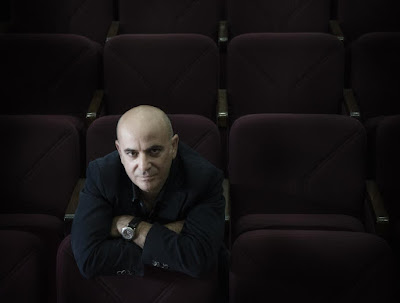 A unique collection of videos about the Sardinian heritage are available on Vimeo through the Ethnographic Institute of Sardinia’s on-demand platform, “ISRECINEMA.” There are 52 works (with new ones on the way) that consist of photo essays, documentaries, short films and animated films. The platform contains the institutes first works dating back to the late 1970s and the most recent productions. All were shot on the island of Sardinia. Some have had considerable success, including  Paolo Zucca’s "The referee," which earned him a David di Donatello for Best Short Film.

One compelling documentary is "La cena delle anime" (Supper for Dead Souls) by Ignazio Figus, which made its North American premiere in New York last year at the Margaret Mead Film Festival. A Sardinia native, Figus has made it his life's work to study the culture of his land. He works with ISRE, using the medium of visual anthropology to report his findings.

I talked with him about his fascinating work and the tradition featured in this short film.

Tell me a little about this tradition and how this project came about?
The film project “The Dinner of Souls” was developed as part of the research programs carried out by the Regional Higher Ethnographic Institute of Sardinia (ISRE), in particular on the special relationship between food and death. This connection appears clear in the tradition known in Sardinia as “Sa chena de sos mortos” (The supper of the dead) which consists of preparing, on the night between November 1st and 2nd, a complete meal characterized by “sos macarrones de sos mottos” (the macaroni of the dead) and delicacies particularly pleasing to the dead, that nourish them in the belief that at night they return to their home to feast. There is a belief in some towns that in order to better show the way to the souls, a light is left lit in the window.

How did you find the woman featured in this story?
In the fall of 2015, fortunate circumstances allowed me to meet Mrs. Pasqua Goddi, a lively ninety-year-old from Orune (a town in the province of Nuoro) who, on the occasion of the commemoration of the dead, prepares a sumptuous banquet for the dead of her family every year. In a November setting, misty, a bit gloomy, tempered by the sharp irony of the protagonist, I was able to document an intimate family ritual, so full of meaning. Signora Pasqua appears hieratic in her ancient attitude: the kitchen is transformed into a sanctuary and the table is set in an altar. Alongside this “liturgical” climate, the theatrical potential of Signora Pasqua is manifested, which is endowed with a wide range of ironic, amusing and biting expressions that she has wisely distilled during the filming. But these were fleeting “curtains.” Soon after, we find the old woman deeply understands her role as a “medium”. In reality, it was the very silence and precise gestures of Mrs. Pasqua that were the cornerstones of this observation. 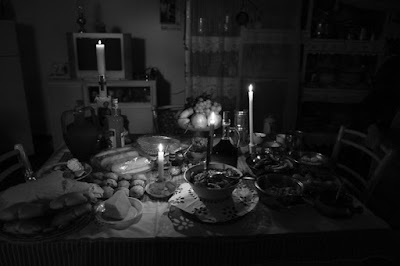 The effect of black and white is beautifully striking. Tell me about your choice in giving the film this particular atmosphere.
For me, working in visual anthropology, the choice of black and white has been rather painful. It is in fact an impoverishment of information in favor of aesthetics. I often make a joke: I didn’t choose black and white, but it was wanted, indeed demanded, by the people and places described. In reality, I really think that every situation, every face, every place, needs its own photographic tone. Black and white helped me to make some elements of modernity in the house less distracting and less present. In this way, it leads the viewer to a greater concentration on the unfolding of the action.
I’d like to mention a reflection made by a young researcher who last spring was in the audience during the presentation of the doc at the Ethnografilm Festival in Paris. During the Q&A she told me: “I find the choice of black and white, very appropriate because this somehow becomes a metaphor for death that removes color from men and things.” I greatly appreciated this reflection and made it my own.

What did you learn about the culture while making this film?
This is a known ritual in Sardinia and in most of southern Italy, and I knew this well before shooting. What I found interesting is that during the filming, I realized how this old woman, officiating priestess of the rite, has risen to a paradigm, becoming an expression of a popular religiosity that appropriately leads the dead back to where they belong, to the family, to consume the common meal.

I can't help but wonder, after the woman leaves the dinner on the table overnight, how she feels in the morning when the food is still there. I assume that, unfortunately, the dead don't end up eating the dinner. It leads me to wonder if every year there is a sense of sadness when the family must come to terms with the dead not actually having visited.
I assure you that during the filming, there was a clear perception of a genuine connection with a possible Beyond. Nothing rational, of course, but a strong suggestion. The food is left on the table for the entire night and consumed by the family the next day. In some places, the dishes are distributed among the less wealthy people of the town. Literature has also been interested in this rite. The Sardinian writer Grazia Deledda (Nobel Prize for literature) writes: “... Giuseppe remembered that the old maid used to prepare a small dinner for the dead every year who returned to the house where they lived: and the next morning he didn’t sweep because something of them could have remained on the floor. The curious thing is that every year the dinner disappeared: and Giuseppe, as a child, crossed the kitchen the next morning and the courtyard in leaps for fear of trampling on something of them ... “. A beautiful lyric, isn’t it?

It is indeed beautiful and regardless of your beliefs, it's comforting to imagine that we can still do something nice for our loved ones who are no longer with us. Nobody knows for sure what happens after we die, so perhaps the souls really do visit. The food is not wasted, so what harm can there be in continuing the tradition?