Echoes of Italian Cinema Past in the Work of Paolo Sorrentino 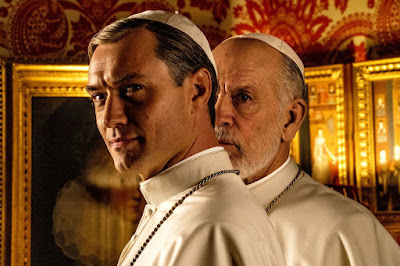 This fascination surrounding the enigma of Catholicism has been present throughout the director’s career but came to a head in his 2013 Oscar winner, “La grande bellezza” (The Great Beauty). If there was a prelude to the HBO series, it would be that film.

From the opening hymns to the main character, Jep Gambardella (Toni Servillo), curiously gazing into a parochial school, the lure of the Church is always present. “You can’t imagine how much one learns by living alongside a cluster of religious institutes,” he later notes. There is a curiosity about this gated life, not only about what goes on behind closed doors, but who the people are behind them. In those opening scenes, Jep watches a young nun as she picks oranges from a tree. And later, as if the image stayed with him, he watches children running though the grounds of the school in between the trees while a religious hymn plays in the background. He is profoundly inquisitive about what he is witnessing. Looking at that scene in retrospect, it is very telling of what was to come in terms of the series.

There have been comparisons to Federico Fellini and it's my feeling that Fellini has indeed been an influence in Sorrentino’s career. In Fellini's 1970 documentary, “The Clowns,” he addresses the allure of the circus and talks about where it began. He recalls a nun from his childhood who he claims stood about a foot tall, describing her as “always in a hurry, saying she had to do everything because the saints didn’t trust anyone else.” He went on to say that she divided her time between the convent and the madhouse. Fellini was also known for his use animals and the ocean as a backdrop, with key scenes in “La Dolce Vita,” “Satyricon,” “Amarcord” and “Giulietta of the Spirits.” Think about the giraffe in “The Great Beauty,” the kangaroo in “The Young Pope” and the ocean in the “The New Pope.” Each seemed to be a protagonist in its respective scene. This is very felliniesque.

“The Young Pope” begins with the promise of a new chapter in the Catholic Church as Pope Pius XIII aka Lenny Belardo (Jude Law), walks onto the world’s stage to greet the faithful under the tumultuous storm clouds of a downpour. He opens his arms, looks up to the sky and parts the clouds, giving way to the bright rays of sunshine and hope for the future. But then we realize it was just a dream. This surreal opening sets the tone for a series of flashbacks as Lenny has numerous recollections of his youth and the disconnect with his parents. He often questions his devout faith and develops intense feelings for Esther (Ludivine Sagnier), the wife of a Swiss guard. The emotional strain of these combined soul searches takes a toll on him and he collapses in the last episode. The exceptional international cast along with a few of Italy’s beloved contemporary actors, including Silvio Orlando as the devious Cardinal Angelo Voiello, earned the series two Emmy nominations, making it the first Italian series to be nominated for a Primetime Emmy.

Sorrentino doubled down on his visual shock factor and produced a much darker series in the second installment, titled, “The New Pope,” which received as much criticism for its lack of a moral base as it did praise for its artistry.

The series opens with Pope Pius XIII in a coma and the search for someone to replace him as pontiff. After the shady death of the first choice, the search ultimately leads to Pope John Paul III aka John Brannox (John Malkovich), an English aristocrat and closet addict who also has issues with his parents. With Cardinal Voiello retired but always involved, he stands by as Pope John Paul III eventually self-destructs, leaving the church while a recovered Pope Pius XIII meets a similar fate. Meanwhile, there is a lot of sex and misbehaving, which one can argue echoes certain films of Pier Paolo Pasolini, like the controversial 1975, “Salò, or The 120 Days of Sodom.” The strong concentration on this dark tone tends to take away from the intimacy of the characters that was established in the first installment.

“The Young Pope” and “The New Pope” are available through HBO’s streaming platforms. Fellini’s “The Clowns” is available on Mubi with an Amazon Prime membership. Sorrentino’s “The Great Beauty” is available on Amazon, iTunes and YouTube. We’ll keep you posted on the release date of the final series.

Amedeo Nazzari: The Once and Future Idol

He’s been referred to as the “mustachioed matinee idol,” but a newfound interest in 1950s melodramas has made him an international art house...