January 20, 2020, marks the 100th birthday of Fellini. To mark the event, Cinecittà will present him with a gift, Felliniana - Ferretti dreams of Fellini. The exhibit will be housed in Cinecittà studios within the historic 'Palazzina Fellini'.

The work bears the signature of Dante Ferretti, the Oscar-winning scenographer who for Fellini was one of the magical architects of his visions, an artist-craftsman capable of giving shape to his dreams, and Francesca Lo Schiavo, a close associate of Ferretti, and an internationally acclaimed scenographer and set decorator. The exhibition offers full-immersion into Fellini's imagination as well as the dreamlike and suggestive story of an artistic partnership and friendship.

Felliniana, produced and promoted by Istituto Luce-Cinecittà, is a small city within Cinecittà, a physical and dreamy space that in a collected journey contains mementos of the entire Fellini universe. The exhibition unfolds in three main areas- three stages of a journey, the places of his inspiration.

The Central Room, graced by the posters of the films as in a magnificent fresco, tells the story of the car, a regular ritual between the director and the set designer: the journey on the Fiat 125, with which Federico Fellini went to Cinecittà often accompanied by Dante Ferretti, and with which he loved to wander the streets of Rome at night with his friends (featured in Ettore Scola's How Strange to Be Named Federico). The central room is a physical and temporal space where conversations and exchanges of ideas took place, but also tales of dreams, on which Fellini questioned his scenographer.

The route continues in the Pleasure House, a synthesis room of the imagination contained in The City of Women, with the toboggan slide and the soubrettes that surround Marcello Mastroianni. 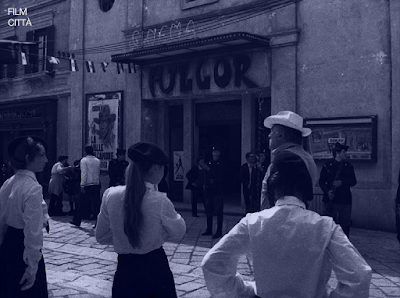 It leads to the final room, that of the Fulgor, the emblematic place for Fellini's childhood and his initiation into cinema. The iconic theater was recently restored by Ferretti in Fellini's hometown of Rimini. In the three rooms, Ferretti has built a new ideal home for Fellini.

Cinecittà’s Felliniana, which will open its doors at the end of January, is one of many worldwide celebrations for someone considered the most representative of Italian directors in the world. Among the celebrations is the great restoration of all of Fellini's work by Istituto Luce-Cinecittà, Cineteca di Bologna and CSC-Cineteca Nazionale. These works, which include The White Sheik, I vitelloni, La dolce vita,
8 ½ and Amarcord will be shown at retrospectives around the world, including the prestigious BFI in London and the new Academy Museum in Los Angeles designed by Renzo Piano.

Cinecittà is located on Via Tuscolana in Rome. If you are traveling by subway, take the Red Line in the direction of Anagnina and exit the Cinecittà stop. For more information, visit Cinecittà online at www.cinecitta.com and www.cinecittasimostra.it.
at January 17, 2020