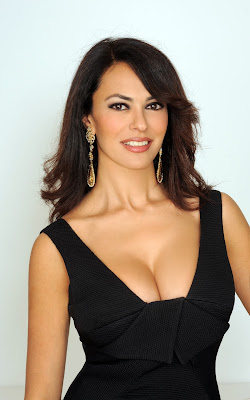 ﻿With an impressive list of film and television titles, Maria Grazia Cucinotta proves that her talent matches her Sicilian bombshell looks.

Born in Messina in 1968, Cucinotta got into modeling when she was just a teenager. Shortly thereafter, she headed north to Milan where she ended up leaving the modeling industry altogether for a career in television and film. Although she has paid her dues with hard work and dedication, success came almost instantly.  She was taking acting lessons while working on her first job as an actress, a television show called, "Indietro tutta."  It wasn't long after her TV debut that she was spotted by the late actor and director, Massimo Troisi. It was Troisi's 1994 Oscar nominated film, "Il Postino" that catapulted Cucinotta into the international spotlight, and it has been non-stop ever since.  She has appeared in dozens of movies and television shows in Italy and the United States.  She was even a Bond girl in the 1997 film, "The World Is Not Enough."  But it's her coveted Role as Beatrice Russo in Massimo Troisi's "Il Postino" that will always hold a special place in her heart.

I recently caught up with Cucinotta. We talked about that breakout role in "Il Postino," what she thinks of Italian-American culture and how her Sicilian heritage has influenced her work as an actress.

Tell me about the early days of your career and your beginnings as an actress.
I started very young as a model, when I was 16 years old. I moved to Milan, but immediately I was fascinated by the world of television entertainment. My first role was in the TV show "Indietro tutta" by Renzo Arbore. In the meantime I was going to acting class and I was attending lessons in diction. I started in the 1990s as an actress. The fascination of this work is that I can live my life and a thousand other lives, and I can charm the people through the role that I play. They can identify with me, is a form of interaction, someone recognizes himself in the things that I do and say.

You've worked on both sides of the Atlantic, on both the big and small screen.. What are the differences for you in working with Italian cinema  and American cinema?
Italians who live abroad are fantastic, they always give the best of themselves. A lot of Italians who live outside Italy succeed beautifully in what they do, they have a little something extra!  In our country all this is lost, as they sit down and don’t fight anymore. Another thing I noticed is that outside of Italy it's much easier to work in teams, to create synergies, it is normal to put together different realities in order to achieve a higher result. But in Italy there are often envies and resentments that undermine the final outcome. 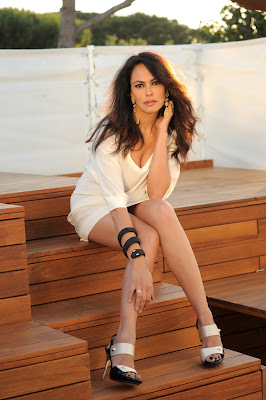 Tell me about your experience working with Massimo Troisi on "Il Postino."
In 1994, Massimo Troisi chose me as his partner in "Il Postino." That was the turning point in my life. That film, so beautifully poetic, was a huge hit abroad. It was an experience of life as well as work. Massimo is a person who will live forever in people's minds, there will be no others like him, and I had the good fortune and privilege of knowing him. The legacy that he left me is to believe in beginners: he chose me for the role of Beatrice, and I was an actress at the beginning of my career, not very famous. I try to carry this message, like him, and I try to help more young talented newcomers. Young people will allow me, thanks to their enthusiasm and their creative ideas, to be part of their dreams!

How has your Sicilian culture influenced your work as an actress, and also just in life?
It influenced my life a lot. I grew up in a place where nothing was given, everything was a conquest, day after day. All this has made me strong and gave me the strength to go on and achieve my dreams. What I have today undoubtedly is the result of my being Sicilian.

What is your impression of the Italian American culture in the United States? Italian Americans are very proud of their origins and we feel a connection with Italy and like Italians, we have strong family values.  Do you sense this when you are in America?
Each of the two peoples, Italians and Americans, have enriched each other, mixing culture, civilization and humanity. To be proud of their origins is a fundamental value, people become more proud when they live abroad for so long, because they notice the differences and qualities of our country. When I’m in America, I’m so proud of my origins!
at May 03, 2012