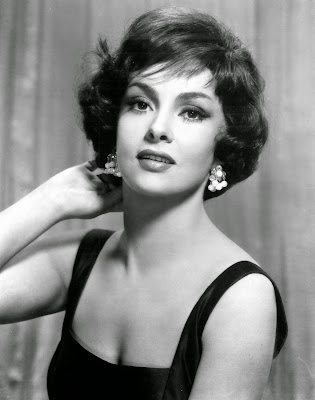 On Day 3 of our week-long series, 7 Days - 7 Women, in which we are showcasing seven strong, talented women working as filmmakers, writers or visual artists, we celebrate the forceful, creative energy of living legend Gina Lollobrigida.

She has been called the most beautiful woman in the world and at 87 years old, she is still a sight to behold as all that outer beauty mirrors the talent and inner beauty of this true, complete artist.

Gina Lollobrigida, the iconic actress, the photojournalist and the sculptress, was born Luigina Lollobrigida on the 4th of July, 1932  in Subiaco, Italy,  a town located in the Province of Rome, near the picturesque tourist destination of Tivoli. Adored by fans all over the world, Lollobrigida has worked with some of the biggest names in Hollywood including Humphrey Bogart, Rock Hudson, Frank Sinatra, Anthony Quinn and Shelly Winters. She acted opposite Bob Hope in his 1968 comedy, The Private Navy of Sgt. O'Farrell and even joined him on one of his many visits to the military troops overseas.

Like many of her Italian screen siren counterparts, Lollobrigida got her start in local beauty contests and from there went into modeling before trying her hand at acting. In 1946, she made her onscreen debut with a small role in Riccardo Freda's Aquila Nera (Return of the Black Eagle) starring the endearing Gino Cervi, grandfather of actress, Valentina Cervi. After that, it was one film after another for Lollobrigida. Then in 1953, she made her Hollywood debut in John Huston's, Beat the Devil with Humphrey Bogart and Jennifer Jones. Her role as Maria Dannreuther caught the attention of American audiences and she became an instant Hollywood star. Just two years later, she was nicknamed, "The Most Beautiful Woman in the World," with the release of her trademark movie, La donna più bella del mondo (Beautiful But Dangerous), in which she played the infamous role of Lina Cavalieri, the Italian peasant who becomes a world-renowned opera singer. She costarred with the equally iconic Vittorio Gassman and Robert Alda. Lollogrigida actually did her own singing in this film while maestro, Mario Bava, created a rich feast for our eyes with his decadent cinematography.


Gina Lollobrigida went on to appear in a whirlwind of hit films including Carol Reed's circus drama, Trapeze with Burt Lancaster and Tony Curtis in 1956 and also that year, starred in Jean Delannoy's The Hunchback of Notre Dame with Anthony Quinn. In 1959 she co-starred with the likes of Frank Sinatra, Steve McQueen, Peter Lawford and Charles Bronson in the warfare drama, Never So Few. She worked non-stop throughout the 60's but started to slow down a bit in the 70's and thereafter. She's entertained a number of different projects in the years following her cinema heyday including politics in which she actually ran for one of Italy's European Parliament seats from her hometown of Subiaco. She pursued her interest in photojournalism and shot a number of interesting personalities including Paul Newman, Salvador Dalí and Fidel Castro.

During the last decade, she has become a talented sculptress, creating larger than life figures in her Roman studio. Many of her works possess a quality that seems to be in motion, like they are dancing with their fabrics are flowing in the wind. Perhaps that quality represents her own free spirit. In an interview with Parade Magazine, she revealed her true passion as an artist. "I studied painting and sculpting at school and became an actress by mistake."

Gina Lollobrigida is forever emblazoned in the hearts of admirers all over the world and we are still enjoying the eternal talents of this classic symbol of grace and style as her zest for life continues to this day.

Thanks to Lollobrigida's vast international success, many of her films are still available today. Amazon is a great source that has currently carries a wide range of her films. You can also visit her online at www.ginalollobrigida.com.
at November 05, 2014