The Life and Art of Marcello Mastroianni 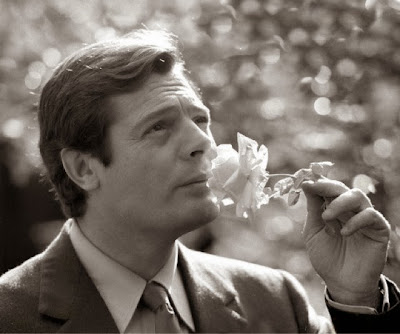 A legendary actor who influenced cinema across the globe, Marcello Vincenzo Domenico Mastroianni was born in 1924 in Fontana Liri, a mountainous area  of Lazio, about an hour from Rome.
Mastroianni spent his childhood near the Eternal City experimenting with acting in stage roles at his local church. During his teenage years, he took odd jobs in Rome, including bit parts in movies. Then during World War II, he was forced by German soldiers to work at a labor camp in northern Italy. He escaped, taking refuge in Venice until 1945. During the post-war period when war-torn Italy was recovering from the devastation it had just endured, Mastroianni returned to Rome and landed a job as a clerk with a British film company. During off-hours, he would get together with local actors to hone his craft. Then in 1947, he landed his first significant acting role in Riccardo Freda’s adaptation of Victor Hugo’s novel, “Les Miserables.”
Watch this video that I recently shot on the Isola Liri, close to Mastroianni's hometown of Fontana Liri.


Within a decade of that first role, he became an international celebrity, with lead roles in some of the greatest films ever made, such as "Big Deal on Madonna Street" and in Federico Fellini’s "La Dolce Vita." Mastroianni starred in more than 100 films, many times alongside fellow cinema icons like Brigitte Bardot, Sophia Loren and Jack Lemmon.

"La Dolce Vita" set the stage for the destined partnership with Fellini that produced unforgettable roles in "8 ½" (1963), "City of Women" (1979), and "Ginger and Fred" (1985). Each role called on his exceptional ability to transform himself into virtually anyone as the characters ranged in diversity from a tabloid columnist to a film director with writer’s block to a retired tap dancer. He credited this skill to his roots in theater, explaining, "I made theater very important in the beginning of my career. Theater actors like to change character roles. They don't like to always do the same thing."

Set in Fellini’s Rome of the bizarre and misfits, "Ginger and Fred" is a tender satire about two dancers, played by Giulietta Masina and Mastroianni, who made careers imitating Rogers and Astaire and are reunited on a tacky variety show. Mastroianni and Masina absolutely shine together. Lifelong friends, it was the first time the two appeared in a film together and they were brilliant.

Although he romanced dozens of leading ladies on the big screen, Mastroianni found his cinema soulmate in Loren, co-starring with her in a dozen beautiful, classic films. The majestic duo is such a pleasure to watch as the two share an unspoken chemistry and ease. Soon after teaming up, they became the epitome of the perfect Italian man and woman in love. A few of their masterpieces include Vittorio De Sica's "Marriage Italian Style," "Sunflower" and "Yesterday, Today and Tomorrow," Ettore Scola's "A Special Day" and Dino Risi's "The Priest's Wife." Loren spoke of Mastroianni at the 2014 Cannes Film Festival, while being honored for her extraordinary career, saying, “He was an amazing man with a great sense of humor and when we got tired, he would begin to tell jokes. It was 20 years of work and fun.”

Another of Mastroianni’s leading ladies was his daughter, Chiara Mastroianni, whose mother is the French actress Catherine Deneuve. The two starred in Raúl Ruiz's "Three Lives and Only One Death" in 1996. His performance earned him the Silver Wave Award at the Ft. Lauderdale International Film Festival. Then, the curtains were drawn with his final film, "Voyage to the Beginning of the World," which was released posthumously in 1997.

Life imitated art in terms of romance throughout Mastroianni’s life. He married fellow actress Flora Carabella in 1950, and stayed married to her until the day he died. However, he was known for romances with his onscreen leading ladies, including actresses Anouk Aimee, Claudia Cardinale, Lauren Hutton and Ursula Andress. He was involved in a serious relationship with Faye Dunaway, whom he met while shooting Vittorio De Sica's "A Place for Lovers" in 1968. The actress wanted to marry and build a life with him, but his Catholic faith kept him from divorcing his wife. The relationship lasted for three years until Dunaway finally gave up. Mastroianni didn’t stay single for long. Shortly after their breakup, he began seeing Deneuve. The two stayed together for about four years and during that time worked together on four films. In 1972, Deneuve gave birth to their daughter Chiara. In the late '70s, he became involved with Italian author and filmmaker, Anna Maria Tatò. They remained together until his death in 1996.

Mastroianni passed away at his home in Paris at the age of 72 from pancreatic cancer. The Eternal City paid tribute to him by turning off the Fountain of Trevi and draping it in black. The fountain was a key backdrop in Fellini’s "La Dolce Vita."

Stream these Mastroianni treasures on Amazon..