American Filmmaker tells the Story of Sacco and Vanzetti 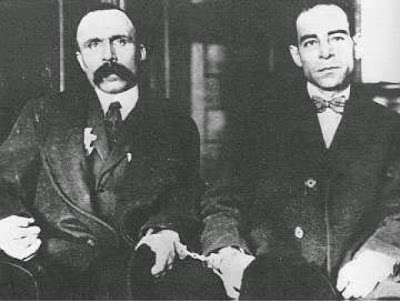 The year was 1920. The climate for Italian immigrants in America was tumultuous. Prejudice was running rampant and the frustration of immigrants was mounting. For southern Italians, Nicola Sacco and Bartolomeo Vanzetti, that prejudice, that deep-rooted hatred of a certain group of people, took them away from their families and eventually cost them their lives.
Nicola Sacco and Bartolomeo Vanzetti came to America for the same reason as most of our ancestors did; to find a better life, to walk on the streets paved with gold. As it has been said, not only weren't the streets paved, the immigrants were the ones who did the paving. The men felt the working class in America was treated unfairly and so they became involved with Italian anarchist Luigi Galleani, an advocate for violence in the name of politics. During that time, Italian anarchists were on the government's watch list and considered dangerous enemies. Sacco and Vanzetti were no different. The two had associations with those accused of bombings in 1919. Then on April 15, 1920, a shoe factory paymaster and a security guard were robbed and killed in South Braintree, Massachusetts. That's when Nicola Sacco's and Bartolomeo Vanzetti's lives changed forever.
The men were accused of the crime and stood on trial twice. The presiding judge both times was Webster Thayer. A Boston Globe reporter said of Thayer, "[He] was conducting himself in an undignified way, in a way I had never seen in thirty-six years. I have seen the judge sit in his gown and spit on the floor." More than a dozen witnesses were produced by Sacco and Vanzetti, most of whom were dismissed due to their broken English. Several witnesses for the prosecution who had been interviewed by detectives shortly after the crime, changed their initial descriptions of the suspects and getaway car. Both men had alibis. Those were dismissed too. A Portuguese convict named Celestino Madeiros claimed it was he who committed the crime and Sacco requested a new trial. That was also denied. Then on August 23, 1927, after worldwide pleas and protests, the two men were executed in the electric chair in the United States of America, the country in which they searched for a better life.

Sacco and Vanzetti. It's a case that shocked and angered the world and now the documentary will break your heart. Filmmaker Peter Miller tells the story of the two Italian immigrants from their lives in Italy, their dreams of America and the events that lead to that fateful day in 1920. The 80-minute film is made up of interviews by historians, people who were actually there when the story broke, Nicola Sacco's family in Italy and heart-wrenching letters written by the men while they remained behind bars. The footage alone in this film is a reason to see it... the sea of people who crowded the streets of Boston protesting the execution, the people who marched behind the men's coffins. Miller captured the passion and chaos the trial provoked around the world when it was happening. Although it was nearly 100 years ago, it is a timeless story of broken dreams, sacrifice and courage in the face of death.
I had the privilege of talking with Peter Miller about his film. He told me what inspired him to tell this story and how the plight of these Italian immigrants mirrors the struggles and challenges of immigrant groups today.
What was it about the story of Sacco and Vanzetti that inspired you to make this film?
I make films about American history, and my passion is for stories of American working class and radical movements; the Sacco and Vanzetti case is a signal moment in that history.  It is also a story from the past with great resonance in the present, at a time when we’re still grappling with issues of civil liberties and the rights of immigrants.  But above all, I was drawn to the two remarkable men at the center of this story.
What moved you the most about their story?
When I began the project, I was drawn to the larger meaning of the Sacco and Vanzetti story, what it said about justice and politics and ethnicity.  But then I read the letters that Sacco and Vanzetti wrote from prison.  Neither man spoke much English when he went to prison, but during the seven years between their arrest and their execution, Sacco and Vanzetti created some of the most powerful  writing I’ve ever read in the English language.  I found myself drawn to these two men as people, not as symbols or abstractions.  I realized that my film had to be about how Sacco and Vanzetti – and the many people they touched experienced this ordeal on a personal level.

Was it difficult to find people to talk about the case on camera?
Very few people are still alive who remember the case personally.  Yet we found as many as we could – including Vanzetti’s neighbor and the daughter of the murdered paymaster.  My filmmaking partner Amy Linton and I knew that without many living witnesses, we would need to find other people who could speak passionately about the story – historians, artists who have interpreted the case in their work, writers, family members.  And we allowed Sacco and Vanzetti to help tell their own stories, through the beautiful readings of their letters by the actors Tony Shalhoub and John Turturro.
What was it like to communicate with their family members back in Italy? Do you feel that they have resentment towards the U.S. or do they believe that the people of our country fought for the freedom of Sacco and Vanzetti?
One of the great highlights of making the film was meeting Nicola Sacco’s niece in Sacco’s hometown of Torremaggiore, in Puglia.  Fernanda Sacco has devoted great energy over many years to helping keep her uncle’s story alive – and has even gotten her town to put up a monument to these two slain radicals in the local cemetery.  Mrs. Sacco visited me in New York as we were editing the film – I brought her on a ferry to the Statue of Liberty, where she wept, remembering how America betrayed the ideals the statue represented by robbing her uncle of his liberty and his life.

And how about the daughter of the robbery victim? She said that someone thought Sacco and Vanzetti were guilty.  Does she believe justice was done?
When we asked the paymaster’s daughter whether she thought Sacco and Vanzetti killed her father, she could only answer that “somebody did.” Clearly justice was not served in this case. It’s not the victim’s family’s responsibility to figure out who committed the crime, that’s the job of the courts.  The trial was not only a travesty of justice, it was an insult to the victims of the crime, who are still waiting for justice to be served over eighty years later.

Do you feel the case has had a lasting impact on our judicial system?
The Sacco and Vanzetti case didn’t break important legal ground, but it did have an enormous impact on the social consciousness of generations of Americans. The trial helped to define America in many people’s minds, and the two men’s courage inspired millions of people to struggle for a better world.  We begin our film with a quote from Vanzetti, in which he states that had it not been for their ordeal, he and Sacco would have died in obscurity.  The case enabled them to do tremendous work for justice; their agony, Vanzetti reflects, was also their triumph.
You brought our modern international conflicts into the film.  How do the prejudices against Sacco and Vanzetti parallel to what's going on in the world now?
Italians were subject to vicious discrimination in this country in the early part of the 20th century.  Now they’ve been replaced by other ethnic groups.  Can the lessons of Sacco and Vanzetti’s time help us consider how we interact with present-day immigrant groups like Latinos, Muslims, and Arabs? I hope that well-established immigrant groups today will be as welcoming to new arrivals as we would have liked others to be to us when our families came here.
What do you feel is the legacy of Sacco and Vanzetti?
The case of Sacco and Vanzetti tells us a great deal about the dangers of allowing politics and prejudice to taint our judicial system.  But the huge public outcry on behalf of the two men tells us something even more important.  The public can and must stand up against injustice and bigotry whenever they raise their ugly heads.  Millions of people marched on behalf of Sacco and Vanzetti – I would like to think that such an outpouring of concern could happen again today.
For more information or to purchase the film, visit www.willowpondfilms.com.
at February 17, 2015