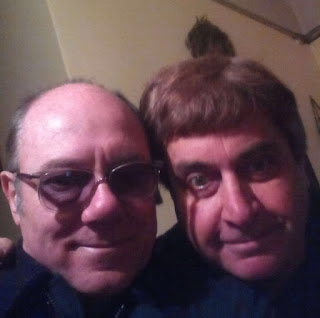 The beauty of Italian cinema lies in the diversity of its genres and styles. Although the ’80s have received its share of criticism for its less-than-profound output, it was the decade in which contemporary maestro Carlo Verdone emerged as a creative young director and actor. The characters he brought to life during those years became permanent fixtures in Roman pop culture. Films like “Un sacco bello,” “Bianco, rosso e Verdone,” and “Borotalco” gave birth to the iconic Mimmo, Leo and Sora Lella.

Enter Stefano Natale, the real-life muse behind Leo and Mimmo. Natale was the subject of a documentary presented at the 2015 Festa del Cinema in Rome. One of four protagonists in Luca Ferrari’s “Showbiz,” he is a soft-spoken gentle giant who recalls his life with Verdone and the creation of his characters in a nostalgic, affectionate manner. “Verdone and I grew up together in the same building near Ponte Sisto,” Natale recalls. “Our grandmothers were cousins, and for 30 years we saw each other every day until the ’80s when he got married and moved to another house. The characters of Leo first and then Mimmo arose because I lived with my parents and then, after my father’s death, I stayed with my mother for another 14 years. Everything he says in his films is partly true, from the Spanish girl that I brought home to what was going on with my mother to the phone calls and my relationships with my girlfriends. I thought that the success of these characters would last a few years and yet still, my tone of voice is easily recognizable and imitated. Wherever I go — in stores and cafes — I take with me this story. It’s been more than 30 years, and it still gives me so much pleasure and fun.” 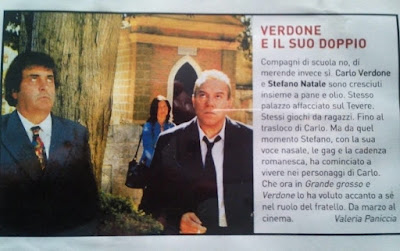 Natale enjoys showing old pictures of the two of them together and does hilarious impressions of Verdone impersonating him. Those characters had an impact on his life and career. He pursued acting and appeared in television shows and commercials throughout the following decades. He also had parts in Verdone’s films, “Bianco rosso e Verdone,” in which he played a sharpshooter, and “Grande grosso e Verdone,” in which he played the brother of Verdone’s character. However, there is a whole other side to Natale that most people don’t know about. He is an award-winning graphic designer and accomplished painter. In the film, we see that the walls in the foyer of his home are graced with his colorful portraits. For as much as he loves to meet his fans and talk about the old days, like most artists, he needs his solitude. Often, he eats dinner alone and then retreats to his studio to create magnificent works inspired by the enchanting Eternal City and his love for cinema.

When he’s not painting, he’s rehearsing for the stage. He is a favorite on the Roman theater scene and his larger-than life persona engages his audience and draws crowds of locals who enjoy watching this character that, for some, brings them back to the simplicity of the ’80s with his undeniable echoes of Leo and Mimmo. There is an Italian expression used to describe someone that is simple and sincere: “Pane al pane, vino al vino.” This phrase perfectly describes Natale and is the reason people are drawn to him whether on stage, on screen or having a cappuccino at his local Roman café.