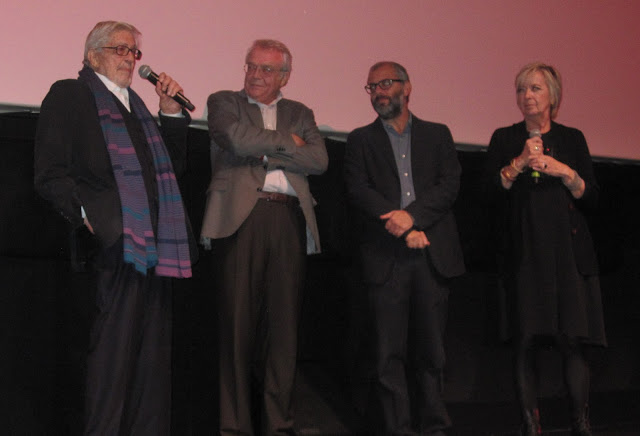 Born in 1931 in the southern region of Campania, Ettore Scola launched his filmmaking career in the early 50’s creating iconic films like Un Americano a Roma starring Alberto Sordi and Il Sorpassso starring Vittorio Gassman. However, he began writing long before. Following in the footsteps of his mentor, friend and colleague, Federico Fellini, Scola got his start writing for the Rome-based satire newspaper, Marc'Aurelio. He grew up reading the paper to his blind grandfather, with many of those sketches and jokes written by a very young Fellini. Scola joined the staff of the paper after Fellini moved on, but the two met through mutual colleagues and grew to be close friends.

During his career as a writer and director, Scola won six David di Donatello’s (the Italian equivalent to the Oscar) and was nominated four times for an Oscar for Best Foreign Film. He has dozens upon dozens of titles to his credit, but a few of the most popular are the 1974 ensemble masterpiece, C'eravamo tanto amati (We all loved each other so much), the 1965 Lo conoscevo bene (I Knew Her Well) directed by Antonio Pietrangeli, starring Stefania Sandrelli and the 1977 Academy Award-nominated Una giornata particolare (A Special Day) starring Sophia Loren and Marcello Mastroianni. I recently saw his very latest work to reach American shores, the 2013 documentary, How Strange to Be Named Federico about his dear friend and colleague Federico Fellini.

“Fellini loved driving and he treated his insomnia by taking his friends out in turns for midnight drives: true and tried kidnappings. He’d pick up drunks, compulsive liars, dethroned princes, even a few streetwalkers.. out of curiosity, out of an uncontrollable love for life. And with him, that car became a confessional booth. Life was a party, he loved to say, so why not live each moment as one?”  Scola recalls many aspects of Fellini’s personality and idiosyncrasies. Many of the scenes take place in a car driving around Rome. Through the windows, we see the landmarks, the fountains, the piazzas and of course, the Romans. Rome was to Italy’s Fellini what New York City is to America’s Woody Allen- a metropolitan muse. I use Allen as an example because Fellini has been a huge influence on his work. In fact, Scola says in his documentary that Fellini’s plotline in The White Sheik inspired Allen’s To Rome With Love.

In How Strange to Be Named Federico, Scola speaks to the strong presence of the muse in Fellini’s work, which in his case was more than one. It’s safe to say there were four: actor Marcello Mastroianni, Giulietta Masina, his wife of 50 years, the city of Rome and the Romans. It is noted in Scola’s documentary that “Fellini adopted Mastroianni as an ideal alter-ego in his main films.

I recently saw Ettore Scola in person at Rome's Festa del Cinema, where he attended the premiere of his daughters' documentary about him- Ridendo e Scherzando, featuring Pif. Scola was just what you'd expect from a filmmaker from the Golden Age of Italian cinema- a distinguished, elegant man with a gentle manner. One thing I really admire about the young Italian filmmakers is the great amount of respect they have for their predecessors. They adored the filmmakers we've lost, and continue to pay homage to the greats that are still with us.

Many of Scola’s films are available through Amazon, but make sure that you read the reviews before purchasing them because the dubbed copies are not always the highest quality. However, How Strange to Be Named Federico, his homage to Federico Fellini, is available to stream through Neflix. I thoroughly enjoyed it and highly recommend it.
at January 19, 2016