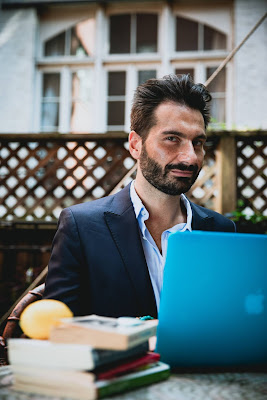 Today's social media platforms bring us into contact with so many interesting people. Some compel you to want to know more about them beyond the photos and interesting content they post. For me, one of those people is Tommaso Cartia. We have been connected on social media for a while and what has struck me, beyond his interesting posts, is his support for others. Although he is always working and posting his own intriguing projects, he always takes the time to acknowledge others and their projects, showing a genuine interest in their work. In this day and age of self-promotion and selfies, this is a unique and endearing quality.

So I contacted him because I wanted to learn more about his projects so that I could share them with you. What I found is a conscientious, prolific journalist and author. He got his start in New York City working for the magazine and website, i-Italy about all things Italy in New York. That experience served as a strong foundation upon which he has built a promising career interviewing and also representing some of the greatest Italian talent to arrive on American shores.

He was so generous in answering my questions and sharing his background and projects with us. Since he has interviewed so many Italian filmmakers promoting their projects in New York, I asked him about contemporary Italian cinema and how it's evolving to mirror Italy's ever-changing society and social issues.

Where in Italy are you from?
I'm originally from Sicily, from a small but enchanting town of fishermen called Scoglitti in the area of the so-called Baroque towns - UNESCO World Heritage sites. I moved with my family to Milan then because of my father's job, he is an engineer. Later on, I also moved to Rome where I worked as a freelance journalist and in public relations and marketing, for film productions and distributions and for the International Rome Film Festival. During that period I also published my first novel Reincarnazione Sentimentale, a lyrical memoir chronicling ten years of my life.

When and why did you move to New York?
I first moved to New York in 2008, when I applied for my MA in Creative Writing and Film Studies at the New York Film Academy. Prior to that, I was in San Francisco attending a language school to improve my English. Like many other things that happened in my life, the idea to come study in the U.S. came as an inner impulse, almost irrational. Something inside of me told me that there was a purpose, a predestination waiting for me on the other side of the ocean. I've always been in love with the American culture and the English language that I started practicing more intensely when I would travel for my father's job. We traveled to China, Dubai, Thailand...

How did all that travel shape you as a writer?
Traveling has always been embedded in my DNA, probably because I come from a sailor's family. My grandfather would sail often to the U.S. for his fishing business. I remember being fascinated by the stories of 'The Great America', that he would tell. I have a vivid recollection also of him bringing back home some products that can only be found in the U.S. like Advil for example. I liked them because they are colorful. I thought they were some exotic candies when I was a kid! Ultimately I think that coming to the U.S. was part of a sort of scripted destiny for me. I like to imagine myself as I'm continuing, ideally, my grandfather's job. He was fishing for beautiful fish, I'm fishing for beautiful stories.

Tell me about your work as a journalist in NYC.
I started working as a journalist here in NY for the i-Italy Network, directed by Letizia Airos, who first believed in my potential and gave me my first concrete opportunity here. I will be always thankful to her. It's been almost three years now and I then moved on working more as a freelancer. I recently started a collaboration with La Voce di NY, brilliantly directed by Stefano Vaccara. These years have been incredible. I had the chance to interview personalities that I would have never even dreamt to encounter in my life like, Actresses Gina Lollobrigida and Valeria Golino, Margherita Buy, Pulitzer Winner Author Michael Cunningham, Writer Erica Jong, Academy Award Nominee Director Gianfranco Rosi, Consul General of Italy in New York Francesco Genuardi, Eataly US CEO Nicola Farinetti, New York Restaurant Owner of Il Gattopardo Group Gianfranco Sorrentino, to name a few. I also worked as a co-writer and as a production coordinator for #TheItalianMentor - a TV Show hosted by Gabriella Carlucci - a familiar face on Italian TV. But that's the magic of this city where all of the big artists and personalities of the world pass by at least once in their lives to leave here a little bit of the beauty of their art, and New York knows how to exalt beauty. 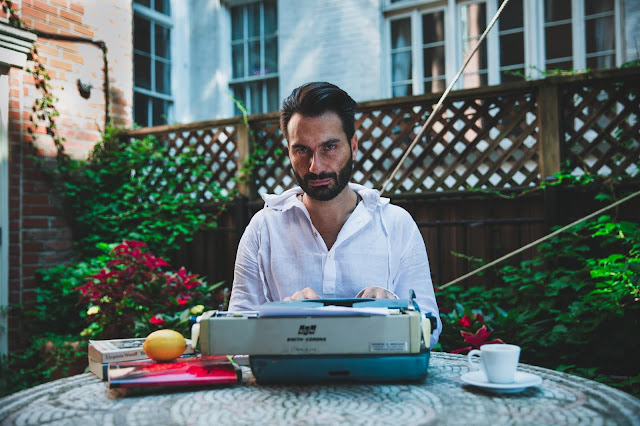 Do you have a most enjoyable/memorable interview?
I would go with Michael Cunningham. I've always been a huge fan of his work and when I read The Hours, it was a big turning point in my life and it also renewed my love and interest for Virginia Woolf. Also, the movie with Nicole Kidman, Meryl Streep and, Julienne Moore is a favorite of mine. I got the chance to interview him and we discussed a lot about the LGBTQ issues between the U.S. and Italy, a country that is very dear to his heart. I felt it was surreal, and I still have the sensation that I have probably just dreamt of that conversation.

What are your thoughts on contemporary Italian cinema?
I think that contemporary Italian cinema has finally found more confidence in being really contemporary. Or at least there's more confidence in showing that to an international audience and to show them that our cinema is not just the cinema of neorealism even though of course it is an aesthetic that will always be a part of our filmmaking. A perfect example is Alice Rohrwacher who is finally getting the recognition that she deserves here in the U.S. Her cinema is contemporary and at the same time, timeless. Movies such as Happy as Lazzaro, The Wonders, or my favorite, Heavenly Body, represent stories that are part of our mythology and folklore but accented with modern themes, characters and new urban landscapes.

Do you feel that contemporary cinema is representative of what is happening in Italy?
As I was saying about Rohrwacher's work, we are sons and daughters of the Romans, of the Greeks, our beauty and our symbology will be always rooted in that Mediterranean aesthetic. And that's the magic of our land that subliminally speaks of those myths, by just looking at it. How that past still converses with the advent of the digital and cosmopolitan world I guess is part of the secret of the beauty of new Italian movies, part neorealism, part melodrama, part modern times. It is evident in the architectural construction of Paolo Sorrentino's movies, for example. Even though his camera work is definitely modern and contemporary, he still plays with archetypal symbols. You can find that dichotomy also in Luca Guadagnino's movies, they are still neorealistic, melodramatic but you can tell there is a modern, fearless sentiment to his storytelling. One of the most contemporary Italian movies that I've seen recently is Sicilian Ghost Story by Fabio Grassadonia and Antonio Piazza. I would say it is contemporary, though the story is filled again with archetypes, myths and magical realism. But it recounts the true story of the brutal killing of an innocent kid kept prisoner by the mafia in Sicily. The aesthetic is definitely modern and the filmmaking is reminiscent of a Guillermo del Toro movie. Still, we are romantic in the way we Italians tell stories, and the land is always a protagonist with its lyrical power. I like to think that our cinema is still very recognizable. Even though our stories have changed and our filmmaking has changed in terms of techniques, our way of telling stories is still universal. 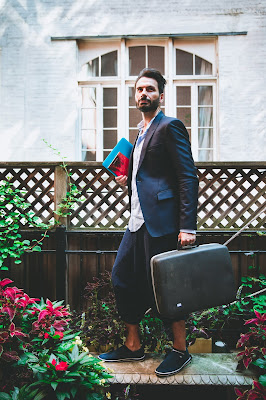 Have you noticed that Americans are more interested in Italian cinema now than perhaps five or ten years ago? If so, why do you think there is more interest?
I think it is because of what I was saying before. Italian directors are feeling the times we are living and that's reflecting in our movies, but also the distributors are more willing to invest in our cinema and bring it to the international audience. Even though we are far away from other cinema powerhouses such as France, America and Asia, the international audience is falling back in love with Italian cinema. We are still neorealistic, melodramatic and imaginary, but we are wearing a more modern vest and we are telling new stories of our Italy in a very critical period for our country. I feel we want to go back to our roots, and I think we are speaking an international language. The world needs to go back to basics and rediscover its past in order to write a brighter, more solid future. There's too much turmoil, too much confusion. Arts can serve the purpose to open our minds, to rest our fears, to empower ourselves, to learn from our land and ancestors. That's what I think Italian cinema is telling us today.

What is your dream?
To continue to be a vehicle in between art, beauty and an audience. I'm a communicator, the term media, really applies to me, I love to serve the artists missions. That's also the purpose of my new editorial project The Digital Poet, https://www.thedigitalpoet.net, and my work as a publicist in New York. Professionally I would like to open my own communication agency and I'm working on a new novel in Italian.