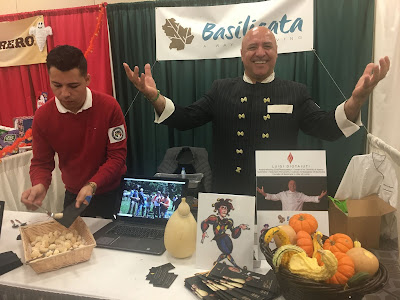 “I am from Basilicata, Italy, and I owe my entire career to this magical region.” With those words begins the charming documentary short, The Beauty of Basilicata. Washington, D.C.-based chef-turned-director Luigi Diotaiuti brought together the worlds of food and film to document the origins of a special dinner he prepared at the James Beard Foundation. The documentary —  which follows his quest to find the best of the region’s products, like peppers from Senise, cheese from Moliterno and beans from Sarconi — also shines a spotlight on his non-profit, Basilicata Way of Living. It was presented at the Lucania Film Festival in Basilicata.

Diotaiuti is one of six children. His town of Lagonegro is nestled in the mountains of Basilicata in the province of Potenza, where his family grew their own crops and raised farm animals. “The only items we bought at the store were sugar, salt and coffee,” Diotaiuti explains. “The day started when the sun came up. First, I had to milk and tend to the cows. Then I had to walk 14 kilometers to school. It was a tough life, happy but not easy.”
Food was always a huge part of Diotaiuti’s life. In 1976, he became fascinated with the program at the Culinary School of the Arts in the nearby coastal town of Maratea and decided to enroll. Attending culinary school made him realize his mission in life was to make his food and traditions his profession. After spending his entire life living and working on his family’s farm, he felt the urge to do everything at once and to see the world. He went on to work all over Italy, as well as in France and England, and even on a cruise ship. “I wanted to see more, and I wanted to learn more,” he recalls. 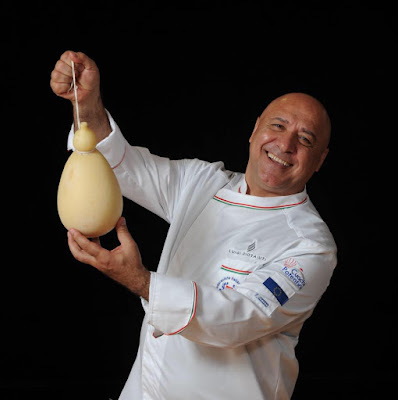 During the 1980s, while he was working in Montalcino in Tuscany, an opportunity arose to work in Washington, D.C. “One day, someone came looking for a chef. It was out of the blue and six months later, I made the decision to go, because I wanted to have one more experience in a foreign country before settling down in Italy. It was supposed to last for three months, and here I am 29 years later.”

Diotaiuti runs two popular but very different restaurants there. Al Tiramisu, which opened 23 years ago, is a D.C. institution. Very small with just 18 tables, it is among the most authentic Italian restaurants in the nation’s capital. “It’s one of those restaurants that you will find in the center of every Italian city, where all the locals know each other and the owner,” Diotaiuti says. Aperto opened in 2016 and has a contemporary flair with a lively bar that is popular Happy Hour destination. There is a main dining room and two private rooms, which are commonly used for business meetings and special events.

Diotaiuti’s experience in making The Beauty of Basilicata and presenting it at the Lucania Film Festival was unforgettable. Although he is busy running his restaurants and making regular television appearances in the D.C. area, he is planning a new project that will document the culinary traditions along the southern tip of his region on the coast of Metaponto. The seaside town was built by the ancient Greeks and still houses the colony’s remnants. The area is close to the border of Calabria, the stomping grounds for the Greek mathematician Pythagoras, whose travels took him to Crotone, Calabria, and then to his final resting place in Metaponto. It is exactly this journey that Diotaiuti is looking to explore and document. Pythagoras is said to have had a secret society, and one of its laws was to refrain from eating meat. Diotaiuti wants to dive deeper into the events that led Pythagoras to become a vegetarian and to recreate the typical feasts enjoyed by the members of this society. “It’s a complex project that will shed light on Pythagoras’s way of living rather than focusing just on him being a mathematician,” Diotaiuti explains.


-Written by Jeannine Guilyard for the June edition of Fra Noi Magazine, Chicago.
at May 21, 2019