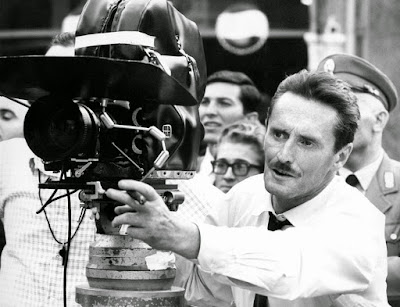 One of the masters of commedia all’Italiana, he had a talent for deconstructing complex  behaviors while maintaining his sharp sense of humor.

Born in 1914 in northern Italy but with an affinity for the South, director Pietro Germi emerged as a leading filmmaker toward the end of the neorealist period and was instrumental in creating the commedia all’Italiana genre. What made his films unique was his ability to grapple with the social issues that were dominating Italy at the time, posing questions that needed to be asked, but in a way that was entertaining, clever, funny and visually beautiful.

The 1954 film Mid-Century Loves is a 52-minute gem that contains five short tales of love directed by Pietro Germi, Mario Chiari, Roberto Rossellini, Antonio Pietrangelo and Glauco Pellegrini. Each vignette is a decadent piece of cinematic perfection with richly detailed sets, regional music and spectacular cinematography. Germi’s segment, War 1915-18 follows the struggles of a young wife and soon-to-be mother whose husband is sent off to war. The segment begins as a draft announcement is posted in the town center and the town’s frustrated schoolmaster (Lauro Gazzolo) must read it to his distracted, illiterate students. Antonio (Albino Coco) is relieved to hear that his birth year has not been listed yet, so he decides to marry his love, Carmella (Maria Pia Casilio). Before long, she is pregnant and he is sent off to basic training. Carmella decides to pay him a surprise visit just before he is sent to the front line. When the war ends, she is waiting with her baby as the soldiers arrive home.

“The serenades of the South. The sweet, warm, exhausting Sicilian nights. The whole time I’d been away. The memory of those nights or one particular night had filled my days with longing and nostalgia.” Those words flow through the mind of Ferdinando Cefalù (Marcello Mastroianni) as he gazes out the train window at the Sicilian countryside in the opening sequence of Germi’s 1961 comedy Divorce Italian Style. The film was among the first revelations of Germi’s ongoing love affair with the Sicilian culture.

Ferdinando is married to Rosalia (Daniela Rocca), a nagging but well-meaning wife who won’t leave him alone. In search of some peace and quiet, he falls in love with the mild-mannered and charming Angela (Stefania Sandrelli), his first cousin through marriage. His feelings for the young girl become all consuming, and he daydreams about ways to kill Rosalia so that he can be with Angela. Finally, inspired by a local murder trial in which the wife, a victim of adultery, shot her husband to save her family’s honor, he concocts a plan to find a man to seduce his wife so that he can do the same. He buys her a sexy black lace dress and takes her out on the town to see how the locals react. Indeed, she catches their attention, so the plan is set into motion. The film garnered three Oscar nominations, including Best Actor in a Leading Role and Best Director. It was awarded an Oscar for Best Original Screenplay. It was the first of many collaborations between Germi and Sandrelli.

Germi teamed up again with the actress for Seduced and Abandoned, his follow-up masterpiece in the commedia all’italiana genre. The film opens with Agnese played by a gorgeous Sandrelli wearing a fitted black dress walking through the narrow streets of her Sicilian village. As she heads to confession, a Sicilian troubadour accompanied by a mandolin tells her story of giving in to lustful feelings for her sister’s fiancé, Peppino. Upon entering the confessional, she breaks down in tears, only to have the priest further shame her. Peppino announces that he doesn’t want to marry a girl who succumbs to temptation, even if it was with him, and flees. A chase ensues as the singing/narrator describes Agnese’s father’s determination to save the family’s honor. Peppino won’t budge, and the family lawyer comes up with a plan to shoot Peppino in a way that would be easily defended in court. The film won a whole slew of awards, including a David Di Donatello for Best Director.

Another notable work is Germi’s 1972 film Alfredo, Alfredo. Dustin Hoffman is Alfredo Sbisà, a down-to-earth, shy guy who falls in love with the beautiful Maria Rosa (Sandrelli). The film begins with the couple meeting with a lawyer to finalize their divorce. As Alfredo contemplates the spell that Rosa had cast upon him, he tells their story through a flashback beginning on the fateful night they met. When Alfredo saw Maria Rosa, it was love at first sight and he is thrilled to learn the feeling is mutual. Little by little, Maria Rosa reveals her controlling, jealous tendencies, which Alfredo believes marriage will solve. But after the two are wed, life gets more chaotic and ultimately becomes unbearable. During a rare night out with his best friend, Alfredo meets Carolina (Carla Gravina), the polar opposite of Maria Rosa. They fall in love and suddenly Alfredo finds himself the leader of a movement to make divorce legal in Italy. Although the film is a comedy, the story is complex and tackles real-life issues of personality disorders and emotional abuse. It’s not a particularly well-known movie but an example of the masterful storytelling by Germi’s generation of iconic filmmakers. The film won a David Di Donatello for Best Film and scored Hoffman honorary citizenship in the town of Ascoli Piceno, located in the central region of Marche, where it was shot.

Germi passed away two years later in 1974 at the age of 60. In 2009, a documentary was made featuring his peers and collaborators. A treasure trove of old interviews, the film includes Claudia Cardinale, Mario Monicelli, Stefania Sandrelli and Carlo Verdone. Titled, Pietro Germi: The Man with the Cigar in His Mouth, it is available to stream at www.criterionchannel.com.

Seduced and Abandoned is also available to stream on Amazon..