While looking for more information on the photos I saw in November at Biblioteca Nazionale di Rome’s Sala Pasolini, I came across a fascinating website (in English!) that provides every single location in Rome frequented by Pier Paolo Pasolini.

First, take this little walk with me through the Sala Pasolini..

“Pasolini Roma” provides a virtual tour of sites relevant to Pier Paolo Pasolini’s filmmaking and writing. The tour takes you through 50 addresses and dates accompanied by a map and photos of Pasolini’s life in Rome. The tour spans 25 years, beginning with his first day in Rome in 1950 to his last day, which took place on the day of his funeral in 1975. In between, you will visit his first job, homes and film locations. 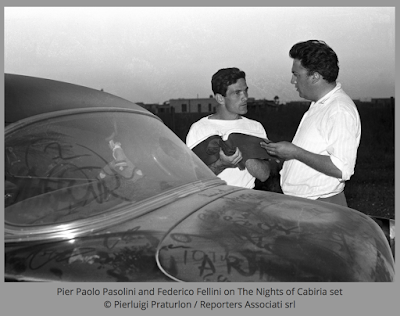 Featured are: black and white set photos taken during the filming of Accattone in Rome’s Pigneto neighborhood with a young Bernardo Bertolucci as his assistant and the story of how a famous scene from Roberto Rossellini’s Rome Open City influenced him to shoot in that neighborhood; candid shots of Pasolini directing Anna Magnani in Mamma Roma; and evenings spent at Piazza del Popolo’s legendary Canova Café, specifically his meeting with Federico Fellini who hired him as a scriptwriter for Nights of Cabiria.

If you love Rome and Pasolini as I do, you must check out this virtual tour… http://www.pasoliniroma.com