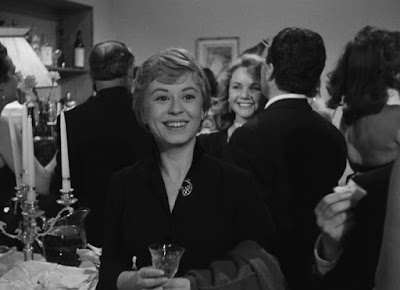 Last year, we celebrated the centennials of Alberto Sordi, Federico Fellini and Franca Valeri. This year, it's Giulietta Masina's turn to shine.

Born on February 22, 1921 in San Giorgio di Piano, a commune north of Bologna, Masina was the oldest of four children born to a father who was a music professor and violinist and a mother who was a grade-school teacher. Her parents sent her as a child to live in Rome with her widowed aunt while she attended school there. As Masina took an early interest in gymnastics, her aunt saw in her a passion for performing and encouraged her to pursue acting. So after high school, Masina attended Rome’s La Sapienza University where she was active in the theater program during the 1941-1942 school year.

In 1943, Masina landed the female lead in “Terzoglio,” a radio show about the adventures of newlyweds Cico and Pallina. The scripts were written by Fellini. Not only did she achieve popularity with the show, she married Fellini. The show lasted until 1947 and their marriage endured for half a century.

In 1950, Fellini directed his first film, “Luci del varità” (Variety Lights) and cast Masina in the lead role for which she won her second Nastro d'Argento. Upon the success of that first collaboration, Masina was given a role in Fellini’s 1952 film “Lo Sceicco Bianco” (The White Sheik) starring Sordi. She played the role of Cabiria, a good-hearted prostitute, appearing in one scene. The character inspired her next collaboration with Fellini, the character Gelsomina in his 1954 “La Strada” and of course, Cabiria in the 1957 “Nights of Cabiria.” Both films won Best Foreign Language Film at the Oscars.

We are celebrating her centennial by taking a walking tour of Roman locations featured in "Nights of Cabiria." Sveva De Marinis, a Rome-born actress, singer, musician and literature graduate is our guide.

Having always been interested in art and music, De Marinis says that cinema was her first love. Passionate about movies and always wanting to know more about them, her studies gave, and still give, her the tools to not only appreciate movies even more, but to deeply understand them. She has studied in the United States and visited many times. At just 15-years-old, she studied for a month at the New York Film Academy in New York during the summer, and two years later, spent a semester studying in Florida. She also speaks French because she spent a semester in France during college. We are thrilled to welcome her as a Rome-based contributor.

Click here to read more about Giulietta Masina and to stream many of her films.

"Around 1918, (Francesca) Bertini was probably the most powerful woman in Italian cinema. She was certainly the highest paid, and her a...