Checco Zalone in the Director's Chair 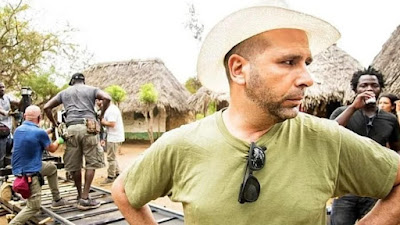 Luca Medici aka Checco Zalone presented his new film Tolo Tolo in Rome on Thursday. It will open nationwide on New Year's Day. I haven't seen the film yet, but the early reviews are intriguing.

Zalone made his directorial debut with this film after a falling out with his longtime collaborator, director Gennaro Nunziante. Co-written by Paolo Virzì, the film explores many of Italy's recent hot topics such as African immigration, a sensitive subject that was thrust into the spotlight by Matteo Salvini's populist government during much of 2018 and 2019. There is an African character obsessed with Italian cinema and the film has generated comparisons to Alberto Sordi. That's enough to make me want to see it!

The story centers on the main character, Pierfrancesco Zalone, called Checco, as he finds himself in a trying period of his life with financial problems, a failed attempt as a restaurateur and two nagging  ex-wives. He decides to pick and leave Italy for a position as a waiter at an African resort. Here, he meets fellow Italian entrepreneurs who also experienced hardships. As they wallow in their misery, he meets Oumar (Souleymane Sylla), an Italophile obsessed with Italian cinema. Through this encounter, Checco becomes involved in warfare and as he looks for a way out, is faced with the realization that all roads lead to Italy. The film is set in Kenya, Morocco, Apulia and Rome.

We'll keep you updated on when the film will be available in North America.