The two have been working for decades with some of the most distinguished directors in the business. Ferretti began his career in 1964 at the age of 21 as an assistant production designer on the set of “Il Vangelo Secondo Matteo” (The Gospel According to St. Matthew) by Pier Paolo Pasolini and went on to work as a production designer for five more movies of his. He then worked on Federico Fellini’s last five movies, from “Prova d’orchestra” (Orchestra Rehearsal) to “La voce della luna” (Voice of the Moon).

Lo Schiavo started working as a production designer with Ferretti on Liliana Cavani’s 1981 “La pelle” (The Skin). They continued on their shared artistic path with exceptional Italian directors like Elio Petri, Sergio Citti, Luigi Comencini and Marco Ferreri. Outside Italy, they worked on Jean-Jacques Annaud’s 1986 “The Name of the Rose” and Terry Gillian’s 1988 “The Adventures of Baron Munchausen.” The next decade would mark the beginning of a 9-film collaboration with Martin Scorsese.

Production design is a very specific field that many times granted Italy its due recognition and the couple has certainly received theirs with a total of ten Oscars nominations for Best Production Design and one for Best Costume, which Ferretti says makes him particularly proud since it’s not even their field. They took home the prize for Scorsese’s 2005 “The Aviator” and 2012 “Hugo Cabret” as well as Tim Burton’s 2008 “Sweeney Todd.” Ferretti reminds the students of his masterclass, “That’s a total of six statues!” 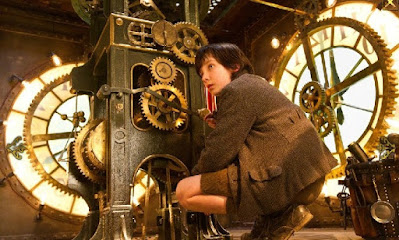 On his professional bond with Scorsese, Ferretti reveals that it was actually he who convinced the director to shoot “Gangs of New York” at Cinecittà studios. He explained that Scorsese wasn’t sure about filming there because he wanted to shoot the movie in the United States. Then one Sunday, Ferretti took him to lunch at a restaurant in front of Cinecittà that Scorsese loved very much. Afterwards, he showed him around. Scorsese seemed to like the set, and Ferretti assured him, “Martin, this is my home, don’t worry, I’ll make it work,” and the rest is history.

Cinecittà has had such an important impact on Ferretti’s life that when he was asked to design “Cinecittà World,” the amusement park inspired by the real Cinecittà studios, he was honored and glad to do it because he saw it as a chance to show kids how to “build” a movie. Located on the outskirts of Rome in an area known as the Castelli Romani, upon the very grounds of Dino De Laurentiis’ film studios, Dinocittà, Cinecittà World was inaugurated on July 14th, 2014 and features movie-inspired attractions such as “Inferno,” a roller-coaster inspired by Dante Alighieri’s “Inferno,” the Spaghetti Western-inspired “Far West Show” and various streets in the theme park inspired by “Gangs of New York.” During the inauguration, he stated that the park is a mixture of dreams and memories of the most important movies of his life that he had the chance to share with his wife Francesca. Ferretti’s attention to detail is what makes the amusement park so unique.

When I think about their movies, the first words that come to mind are “grand” and “specific.” They always create alternative realities. Even when they work on more reality-based films, everything they do is grand and exceptional, but also very detailed and close to the director’s vision. Of course, every production designer has to follow the style and the general atmosphere of the movie, but watching the couple Ferretti-Lo Schiavo at work, you can really tell that they’ve mastered their art throughout the years. They’ve worked on many different movies, with different perceptions, different eras, from the mythological (“Medea” by Pasolini), to the grotesque (“Sweeney Todd”), from the ‘20s (“The Aviator”) to the ‘40s (“Gangs of New York”) and so much more.

What amazes me is the accuracy of the props, even the smallest ones, that make movies and sets as real as possible. When you watch their movies, you can tell that nothing is left to chance, everything has been decided on and studied carefully. Something that catches the eye is the precision and detail of every historical time. One thing is to know how people would dress during a certain time, another is to know what kind of objects people would keep on their nightstand. That’s not something that is left to chance. It requires studying, researching and analyzing every single detail.

What they create on set is not only important for the director and for the sake of the movie, but for the actors too, because they will have the chance to immerse themselves even more into the world of their character and won’t have to rely as much on the imagination. A good production design makes the actor’s job a lot easier. And that, I think, is what every production designer tries to accomplish.