He was nearly 50 years old when he made his feature film debut. Some thirty years later, he is one of Italy’s most beloved character actors.

Renato Carpentieri was born in 1943 in Savignano Irpino, a village in Campania. He originally set out to pursue a career in architecture but became passionate about culture and theater. During the mid-1960s and ‘70s, he helped to promote cultural events in Naples and co-founded a stage company there called Teatro dei Mutamenti where he participated as a director, playwright and actor. In 1980, he began to transition from theater to screen with two television mini-series. A decade later, he made his feature film debut in Gianni Amelio’s “Porte aperte” (Open Doors).

In 1993, upon winning a Nastro d'Argento for best supporting actor for his performance in Gabriele Salvatores' "Puerto Escondido," he took on the role of Gerardo in Nanni Moretti’s cult classic “Caro Diario” (Dear Diary). The role proved to be his breakout film, broadening his acting range and showing a great talent for comedy that audiences hadn’t yet seen. The art of Carpentieri’s exceptional interpretation of Gerardo, an intellectual who prides himself on not having a television set, is the subtly with which he communicated the irony of the character. When Gerardo boards a ferry from Calabria to Sicily on the way to a writing retreat, he binge-watches a number of shows on a community television set, including an episode of the American soap opera “The Bold and the Beautiful,” which is very popular in Italy. The experience torpedoes him into a foxhole of shallow pop culture. He becomes obsessed and cannot stop trying to figure out the characters’ motives and situations, going so far as to ask American tourists for updates on episodes of the soap opera.

Through the 2000s, Carpentieri established himself as an older, wiser supporting character, someone who would often lend an ear to a young, troubled protagonist. Such is the case in Caroline Deruas’s 2016 “L'indomptée” (Daydreams), a mystical French film with an enchanting soundtrack by Nicola Piovani. Carpentieri is Carlo, a gardener who works on the grounds of Rome’s Villa Medici where a group of French artists and writers are enrolled in a residency program. He befriends a young photographer, Axèle, who witnesses sightings of a ruthless 17th century cardinal and the women he seduced who often met tragic ends. Carpentieri’s role is small but pivotal to the story. He brings his everyman appeal to a group of complex, troubled characters. Filippo Timi is brilliant in his role of the womanizing, murderous cardinal. 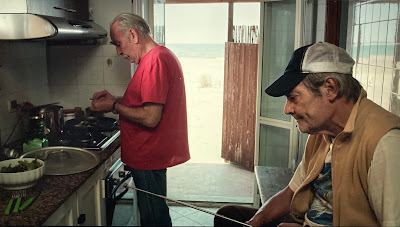 In Valerio Mastandrea’s 2018 “Ride” (Laughing), Carpentieri interprets the role of Cesare Secondari, a retired factory worker who with two of his comrades is preparing to protest the unsafe working conditions that led to the death of a young man. His story runs parallel to that of the grieving widow and son, following the tender friendship between three senior citizens, one dealing with the repercussions of suffering a stroke. They are tormented, posing the question, “If they were still working at the factory, could they have prevented this tragedy?” They fear they’ve become useless in old age and all the progress they made for the factory workers of their generation faded when they retired. Cesare’s storyline has a twist at the end of the film, revealing why this case is so personal.

Adapted from Roberto Saviano’s novel by the same name, Claudio Giovannesi’s 2019 “La Paranza dei Bambini” (Piranhas) follows a group of Neapolitan adolescents who become deeply involved in the organized crime of the neighborhood, Sanità, in Naples. Carpentieri is Don Vittorio, a local mob boss under house arrest. When Nicola, the leader of the group approaches him to take over Sanità due to his confinement, he reluctantly agrees and provides the deadly weapons. The boys take charge and receive a huge payout. Grateful, they strike up a friendship with him, gifting him a huge flat screen tv and video game with the profits they made. “Now your time under house arrest won’t seem so bad. It’ll fly by,” Nicola reassures him. The group suffers a devasting loss but instead of learning a lesson, the tragedy only draws them further into the dark world of crime.

Carpentieri is still very active in theater, having served as the artistic director of the Neapolitan stage company, Libera Scena Ensemble, since the mid-‘90s. His latest role is opposite Sophia Loren in Netflix’s newly released, “The Life Ahead,” directed by the screen legend’s son Edoardo Ponti.
Stream Renato Carpentieri's films on Amazon...
- Written by Jeannine Guilyard for the December issue of Fra Noi Magazine.
at October 12, 2020

Andrea De Sica is the grandson of neorealist legend Vittorio De Sica and the son of famed movie composer Manuel De Sica. He may have been h...