One of a Kind Ugo Tognazzi 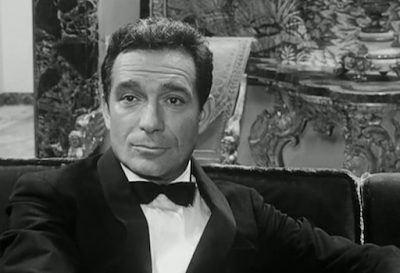 He gained renown during the commedia all’italiana years but his captivating performances kept him working through five decades until his untimely death in 1990.

Born in 1922 in Cremona, Ugo Tognazzi’s first acting experiences go back to his childhood when he participated in local theater productions. In 1945, he won a competition for amateurs and was then officially hired by a theater company which led to a nationwide tour.  A few years later, he landed his first film roles and in the next decade, made a whopping 28 films. However, for all the films he made in the ‘50s, it was the ‘60s and ‘70s when his films were hits also outside Italy, giving him much-deserved international recognition for his lead roles.

Tognazzi had a uniquely self-effacing and multidimensional style. There’s no such thing as a typical Tognazzi character because they were all so completely different. Losing himself in each role, he gifted them with their own identities. Perhaps there’s a consistent dose of pessimism, but that quality was shared by many in his generation of actors. There’s also an air of indifference that makes Tognazzi’s comic timing impeccable, allowing him to deliver the punchline at just the right moment. Thanks to streaming platforms, many of his acclaimed films are available stateside.

Antonio Pietrangeli’s 1964 comedy “Il magnifico cornuto” (The Magnificent Cuckhold) was adapted from Fernand Crommelynck’s book by the same name. Starring Tognazzi as Andrea Artusi, a successful hat salesman married to a beautiful young woman Maria Grazia (Claudia Cardinale), the film explores the consequences of infidelity. After he gives into the advances of a colleagues wife, Andrea begins to question his own wife’s loyalty to the point of becoming obsessed with her having an affair. All through his suspicions and questioning, she remains patient and above all, innocent. Then one night, he lets his imagination get the best of him and it puts them both over the edge. Tognazzi’s strong silences, shrewd smile and conniving glances give voice to his paranoia and suspenseful, controlled reactions. He knew when to be light-hearted and when to go in for the kill.

Watch a clip from the opening scene of the film...

Tognazzi had a small but pivotal role in Pietrangeli’s 1965 follow up, “Io la conoscevo bene” (I Knew Her Well). Starring Stefania Sandrelli, the film follows Adriana Astarelli, a free-spirited starlet trying to make it in Rome’s unforgiving movie business. Tognazzi plays the role of Gigi Baggini, an unemployed aging actor desperate for work. There is an intense dance scene in which Gigi gives an impromptu audition for an exploitative producer (Nino Manfredi). The scene serves as a perfect example of Tognazzi’s total immersion. Gigi is so physically and emotionally invested in this audition, the scene is just exhausting to watch.

Another small part worth mentioning came in the 1968 Dino De Laurentiis production of “Barbarella.” Adapted from Jean-Claude Forest’s best seller of the same name and directed by Roger Vadim, the science fiction film stars Jane Fonda as a futuristic peacekeeping space traveler whose mission is to save humanity. Tognazzi interprets the role of Mark Hand, the “catchman” who assists Barbarella on her journey, seducing her along the way. Tognazzi’s voice was dubbed, so you’re not getting the essence of his complete performance, but not having to follow subtitles gives you freedom to admire him in the prime of his career. The film was made at Cinecittà studios and boasts some pretty zany costumes and set design.

Tognazzi made string of dark comedies in the 1970s that include Elio Petri’s 1973 “La proprietà non è più un furto” (Property Is No Longer a Theft). Known as political filmmaker, Petri’s films often served as commentary on the decline of society and this film is no different with its emphasis on the role that money and power play in corrupting people. A petty thief who calls himself a Mandrakian Marxist, meaning that he only steals what he needs, has a target on Tognazzi’s character, a greedy, morally depraved butcher. “The Butcher” as he is called throughout the film, is a truly despicable character who never really learns his lesson. Click here to watch the film on MUBI for a limited time. Click here to watch it on Criterion Channel. 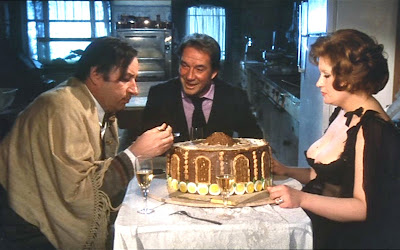 Tognazzi created another grotesque character that year in Marco Ferreri’s “La Grande Bouffe,” a dark comedy about four middle-aged friends, masterfully portrayed by Tognazzi and Marcello Mastroianni along with French actors Philippe Noiret and Andréa Ferréol. The group plans a decadent weekend getaway at a mansion with one goal-  to commit suicide by gorging themselves to death. Equipped with voracious appetites, one by one, the group reaches its goal through carnal and culinary indulgence. Tognazzi plays Ugo, an Italian chef living in Paris who is the designated cook for the weekend. He passionately and articulately creates every meal as if it was his last and the last was indeed his greatest accomplishment. The film has become a cult classic but is not for the faint of heart. Click here to watch the film on iTunes and here to watch it for free on Tubi.

Based on the stage play by Jean Poiret, Édouard Molinaro’s 1978 “La Cage aux Folles” provided Tognazzi the opportunity to create one of his most memorable characters, the gay cabaret owner Renato Baldi. The proprietor of a popular nightclub known for its drag shows, Renato must temporarily straighten out at the request of his son Laurent (Rémi Laurent) who was conceived 20 years ago during a one-night stand with a young actress. This request comes on the heels of Laurent’s engagement to a woman whose politician father is in the middle of a scandal and uses the engagement as an excuse to get out of town and meet the parents. Renato’s longtime partner, the highly emotional Albin (Michel Serrault) does not take the request lightly. What follows is a hilarious lesson on the perils of pretending to be someone you’re not. In 1996, Mike Nichols remade the film, titled “The Bird Cage,” with Robin Williams in the role of Renato Baldi. Williams channeled Tognazzi’s creation and gave a moving performance.

Tognazzi passed away in 1990 after suffering a brain hemorrhage. In addition to his films, his legacy includes his children Ricky, Maria Sole, Gianmarco and Thomas Robsahm who are all successful contemporary filmmakers.

Click on the images below to stream Tognazzi's films on Amazon..